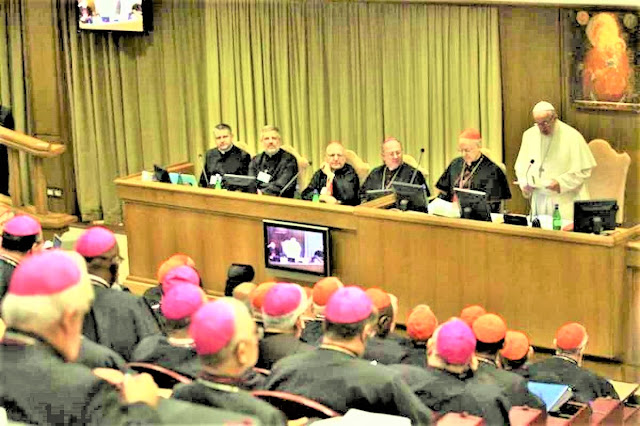 In October, Pope Francis will open a three-year synodal journey with three phases (diocesan, continental, universal) of consultations and discernment, culminating with the assembly in October 2023 in Rome.  This is to help establish the synodality desired by Pope Francis since the beginning of his pontificate. The next Synod of Bishops, scheduled for October 2023, will not only be celebrated in the Vatican but in each particular Church of the five continents, following a three-year itinerary divided into three phases: diocesan, continental and universal. (Edited from Vatican News Excerpt)

“For a synodal Church: communion, participation and mission”

Pope Francis, on the 24 April 2021, approved a new synodal programme for the XVI Ordinary General Assembly of the Synod of Bishops. Initially the Synod, “For a synodal Church: communion, participation and mission,” was hoped to commence in the month of October 2022. The General Secretariat for the Synod of Bishops has proposed new method for the journey toward the Synod.

This path toward the celebration of the Synod comprises of three phases, between October 2021 and October 2023, a diocesan phase and a continental phase that will give life to two different Instrumentum Laboris, and finally a conclusive phase at the level of the Universal Church.

The Synod of Bishops is the dynamic point of convergence that calls for mutual listening to the Holy Spirit at every level of the Church's life(cf.Address of His Holiness, Pope Francis, Ceremony Commemorating the 50th anniversary of the institution of the Synod of Bishops, 17 October 2015).The articulation of the different phases of the synodal process will help to make possible a true listening to the People of God to ensure the participation of all in the synodal process. It is not just an event, but also a process that involves in synergy the People of God, the College of Bishops and the Bishop of Rome, each according to their proper function.

The journey toward the XVI Ordinary General Assembly of the Synod of Bishops will follow the following path.

The opening of the Synod will take place in the Vatican and in every diocese. The Holy Father in the Vatican will inaugurate this synodal path: 9-10th October. Under the guidance of the local bishop, each diocese will open with the same celebration on Sunday 17th October.

The objective of this phase is to consult the People of God (cf.Episcopalis Communio, 5,2) so that the synodal process is carried out through listening to all of the baptised, who are the subject of the sensus fidei – infallible –in credendo.

The General Secretariat for the Synod of Bishops

The General Secretariat for the Synod of Bishops will send a Preparatory Document, accompanied by a Questionnaire and aVademecumwith proposals forconsultation in each local church.

Dioceses (local churches) and Episcopal Conferences or other corresponding bodies

Each bishop will appoint a diocesan contact person (and eventually a team) for the synodal consultation; they shall be a point of reference and link with theEpiscopalConference. They will accompany all the stages of the consultation process in thelocalchurch.(BeforeOctober 2021)

EachEpiscopal Conference will also appoint a contact person (and eventually a team) responsible for liaising with both diocesan officials and with the General Secretariat for the Synod of Bishops.(BeforeOctober 2021)

Consultation with the People of God in each particular Church will conclude witha pre-synodal meeting, which will be the culmination of diocesan discernment.

A period of discernment will begin for bishops gathered in an assembly (Episcopal Conference). They will listen to what the Spirit has inspired in the churches entrusted to them.

Participants in the drafting process of the synthesis include the contact person of the Episcopal Conference with regard to the synodal process and their team, as well as those representatives elected to participate in the Ordinary General Assembly of the Synod, following their ratification by the Holy Father.

This synthesis will be sentto the General Secretariat for the Synod of Bishops along with the contributions of eachof the local churches.(Before April 2022)

The Dicasteries of the Roman Curia, the Universities/Faculties of Theology, the Union of Superiors General/International Union Superiors General (USG/UISG) and other Unions and Federations of Consecrated life, and international lay movements, shall also provide their own contributions to the General Secretariat of the Synod of Bishops.(Before April 2022)

The General Secretariat for the Synod of Bishops will proceed with the drafting of the firstInstrumentum Laboris.(BeforeSeptemberof2022)

The purpose of this phase is to promote dialogue at the continental level about the textof the firstInstrumentumLaboris and deepen discernmentwithin the specific cultural context of each continent.

The General Secretariat for the Synod of Bishops will publish and release the firstInstrumentum Laboris.(Septemberof2022)

Pre-synodaldiscernment in the continental Assemblies.The criteria for the participation of the residential bishops and other members of the People of God is to be established.

The Assemblies will conclude with the drafting of a final document to be sent to the General Secretariat for the Synod of Bishops.(March 2023)

The General Secretariat for the Synod of Bishops will proceed to draft the secondInstrumentum Laboris.(BeforeJune2023)

Celebration of the Synod of Bishops will take place in Rome according to the norms established in the Apostolic ConstitutionEpiscopalis Communio.(October 2023)