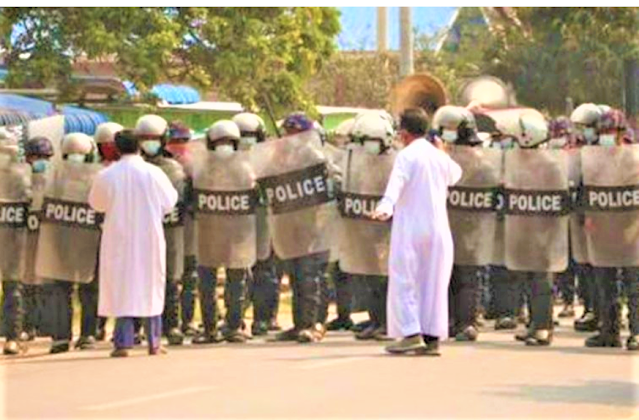 Fides reports that a Catholic priest arrested by the military has been released.

The priest of the diocese of Banmaw, 38-year-old Fr. Colombano Labang Lar Di, was released after 4 days of detention, arrested by a Burmese army patrol on May 14 while on his way to the city of Myitkyina. A military patrol had stopped him and brought him to the army headquarters to question him. As confirmed to Fides by Father Luke Lahpai Hka Li, Director of the Commission for Education in the diocese of Banmaw, the release took place after the Bishop of Banmaw, Raymond Sumlut Gam, sent a letter to the military asking for explanations for the arrest and specifying that the priest's trip was due to pastoral needs.

According to the Bishop, the priest was treated well during his four days of detention. He was asked about the documents and photos found on his mobile phone, where there were documents on Bible courses in the Kachin language and photos of internally displaced people that the Church in Kachin State has been assisting continuously for ten years. In particular, some photographs that also portrayed members of the Kachin Independence Army (KIA) were found. Fr. Colombano explained that he had provided pastoral service in Laiza, KIA headquarters, and that for this reason he had also taken some photos of KIA soldiers.

The priest's arrest came as fighting intensified between the army and KIA in various areas of the Kachin State, which has seen the displacement of more than 5,000 new refugees since March. The local Church is providing humanitarian aid to the displaced who have taken refuge in churches and monasteries. In the parish of Prang Hkung Dung, in the diocese of Banmaw, where Fr. Colombano Lar Di works, there is a camp for displaced people that houses more than 3,000 people. The Catholic Church in the Kachin State, in the north-east of Myanmar, on the border with China, has been committed for more than ten years to the reception and humanitarian and social assistance to displaced civilians, especially through the local Caritas, called "Karuna".

Also last Sunday, May 16, the Bishop celebrated mass in the church of Saint Michael in the parish of Nan Hlaing, where 64 families have taken refuge, due to the recent fighting between rebels and the regular army. According to data from the United Nations Office for Humanitarian Affairs (OCHA), about 100,000 displaced people continue to live in 139 makeshift camps built in the Kachin State; among these, some 60,000 are in government-organized camps, while 40,000 refugees are in territories administered by the Kachin Independence Organization (KIO). Kachin State has a population of 1.7 million people, mostly Christians, including 125,000 Catholics. (PA) (FULL TEXT Release: Agenzia Fides, 18/5/2021)