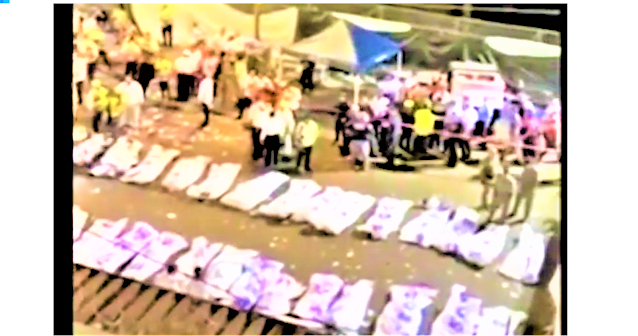 Many thousands of people had gathered on Mount Meron for the Jewish holiday of Lag B'Omer. This was the first large religious gathering in Israel since the outbreak of the Covid-19 pandemic. For over a year, the pandemic cancelled most gatherings and pilgrimages to the Holy Land for Jews, Christians and Muslims. The Mount Meron tomb is considered to be one of the holiest sites in the Jewish world and is an annual pilgrimage site.
The death toll from the accident that took place just after midnight on Friday, April 30, 2021, on Mount Meron, in Galilee, is  45 victims and 150 injured. The ultra-Orthodox Jews had gathered at the tomb of 2nd-century sage Rabbi Shimon Bar Yochai for the annual Lag B'Omer commemorations that involve all-night prayer, mystical songs and dance.
Some people reportedly fell from the bleachers, dragging other participants in the Jewish festival of Lag BaOmer with them, to the tomb of Rabbi Shimon bar Yochai.
The accident, perhaps caused by a structural failure  triggered a mass stampede in which dozens of people were crushed.
Normally, every year on the holiday which commemorates the Jewish rebellion of 132 AD. against the Roman legions, nearly 100 thousand Orthodox Jews would gather.
Interim Prime Minister Benjamin Netanyahu spoke of a "serious disaster" and assured he is “praying for the wounded" and support for family members. Opposition leader Yair Lapid called it a "terrible disaster" and a "sad" night for the nation.
The Assembly of Catholic Ordinaries of the Holy Land sent a letter of condolence to Israeli President Reuven Rivlin; see full text below.
Condolences and prayer

The Assembly of Catholic Ordinaries of the Holy Land sent condolences this morning, April 30, 2021, to the President of Israel, Mr. Reuven Rivlin, on the death of 44 citizens who lost their lives in the catastrophic stampede, which took place last night on Mount Meron in the Galilee during a celebration attended by tens of thousands of Jews on the occasion of Lag BaOmer, at the tomb of Rabbi Shimon Bar Yohai.

The members of the Assembly also expressed their condolences to the families of the victims and their prayers for the recovery of the tens of people who were wounded in the incident.