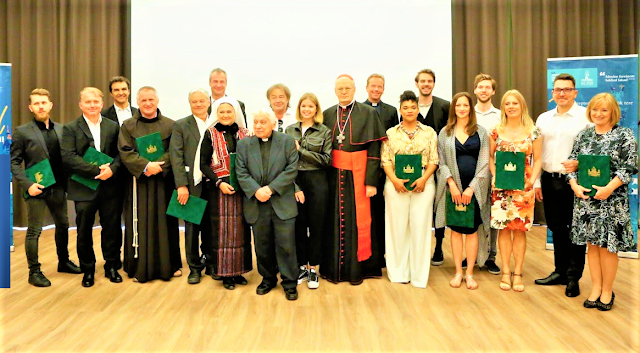 Presented in Hungary, in a press conference with Cardinal Peter Erdo, Metropolitan Archbishop of Budapest and Primate of Hungary, the official anthem of the 52nd International Eucharistic Congress scheduled from 5 to 12 September and a short video, which tells the story of the conversion of three young people. The Anthem and videos that immediately launched on social media. The hymn of Congress 2021 acts as the soundtrack for the clip: an updated version, the organizers explain, of the original song written for the Eucharistic Congress of 1938, "the last time Budapest hosted such an event".

A Congress, that in '38, Cardinal Eugenio Pacelli, future Pope Pius XII, participated as papal legate, which took place in an atmosphere of tension and fear, in the approach of the Second World War. As a hymn, therefore, a hymn of invocation for the peace and unity of peoples and nations was chosen, which became very popular among Hungarian Catholics and beyond, so much so that it was also sung during the Mass presided over by Pope Francis, the June 1, 2019, at the Sumuleu Ciuc Shrine, an area of ​​Romania of Magyar origins.

During the press conference, Cardinal Erdo also presented the "12 ambassadors" of the Eucharistic Congress - which will have as its theme "All my sources are in you", from psalm 87 -, chosen from famous artists, musicians, singers and poets, who aim to be "witnesses of the Eucharist".