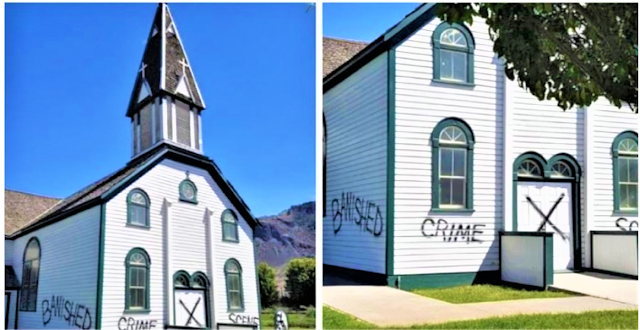 St. Joseph's Catholic Church was vandalised. This church was built by Catholic Missionaries and the Tk’emlups te Secwépemc people. It was established in 1843. Graffiti was spray painted on the outside walls and door on or around May 31.
(Photograph By TWITTER/SECWEPEMCC SECWEPEMC CROW )
The Tk’emlúps te Secwépemc First Nation has expressed its disappointment with graffiti discovered scrawled on the outside of a heritage church on its reserve. In a press release, Chief Rosanne Casimir said the band was “deeply disturbed to learn that the Saint Joseph’s church was vandalized.”
The graffiti incident occurred shortly after the band announced it had discovered the remains of 215 children who attended the Kamloops Indian Residential School, which was run by the Missionary Oblates of Mary Immaculate, a religious order of the Catholic Church. The Kamloops Indian Residential School operated from 1890 until 1977, with the federal government assuming administration of the school from 1969 until it closed in 1977.
Images of the graffiti posted to social media show the words “evicted,” “banished” and “crime scene” written on the siding of the historic building, and “X” on the door. Kamloops RCMP has said it is investigating. “The church was built from the ground up by Tk’emlúps te Secwépemc members,” Casimir said in the release. “We understand the many emotions connected to a Roman Catholic run residential school. At the same time, we respect the choices that Tk̓emlúps te Secwépemc ancestors made, over 100 years ago, to erect this church.”  Although the signboard in front of the church today indicates it was originally built in or around 1870, part of it is actually much older. When the Tk’emlúps band undertook restoration of the church in the mid-1980s, the remains of a hewn log floor system were discovered within the building, possibly part of the original church erected on the site by the Secwépemc te Tk’emlúps. The first missionaries in the area were the Jesuits in 1843. The church’s building today is how the church was rebuilt in 1900.