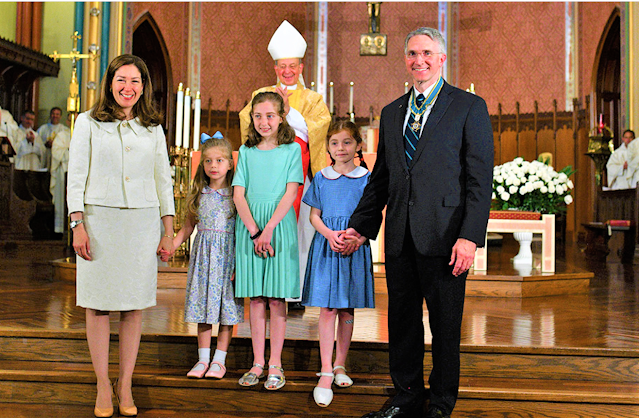 Knights of Columbus reports that the Supreme Knight Patrick Kelly, new Supreme Officers and Directors and State Deputies were officially installed during a historic ceremony.

Patrick E. Kelly was officially installed as the 14th supreme knight of the Knights of Columbus at the conclusion of Mass June 11 at St. Mary’s Church in New Haven, Conn.
“Standing before God, with my family and my brother Knights here assembled, I promise to support and obey the constitution and laws of our Order,” he stated in his oath of office. “I promise to conduct myself in such a way as to personify the principles of the Order, especially the principle of charity, so that the widow, the orphan, the poor, the sick and the homeless may find solace.”
Supreme Chaplain Archbishop William E. Lori of Baltimore was the principal celebrant of the Mass, which took place during the annual Organizational Meeting of Knights of Columbus State Deputies. In his homily, the supreme chaplain noted that the historic installation was held on the Solemnity of the Sacred Heart of Jesus, at the church where Blessed Michael McGivney founded the Knights of Columbus, and during the Year of St. Joseph.
“Worthy Supreme Knight, we are indeed blessed to have you as our leader and we pledge you our heartfelt prayers and wholehearted support and loyalty,” Archbishop Lori said. “Drawing grace and strength from the infinite love of the Sacred Heart of Jesus, finding inspiration from the fatherly love of good St. Joseph, surrounded by the intercessory prayers of Blessed Michael McGivney, may the Knights of Columbus grow daily in wisdom, in love, and in numbers now and for many, many years to come.”
After Past Supreme Knight Carl Anderson conferred the medal of office on Supreme Knight Kelly, the newly installed supreme knight led the faithful in the Litany of St. Joseph and prayed an act of consecration of his administration St. Joseph. Archbishop Lori then blessed the supreme knight, his wife, Vanessa, and their three daughters.
The Kelly Family
The Kelly Family
Deputy Supreme Knight Paul G. O’Sullivan, Supreme Secretary Patrick T. Mason, new supreme directors, and state deputies were also ceremonially installed following the Mass and remarks by the supreme knight. Given delays due to the COVID-19 pandemic, it was the first time in the Order’s history that a supreme knight and state deputies were installed on the same day.
In his remarks, Supreme Knight Kelly emphasized the example of St. Joseph as a model of Catholic knighthood.
“This year [of St. Joseph] is providential for the Knights of Columbus because there are few things the world needs more right now than men in the mold of St. Joseph,” the supreme knight said. In particular, he said that Knights should emulate St. Joseph’s roles as guardian of the family and guardian of the truth.
“Catholic families are struggling to live out their faith and raise their children amid a culture that is increasingly hostile to our beliefs,” he said. “Catholic husbands and fathers, especially fathers of young children, need the encouragement and support of the Knights of Columbus. We can inspire them with the creative courage needed to keep their families strong in the faith.”
Encouraging Knights to embrace their role as “guardians of the family,” the supreme knight continued: “The truth that Joseph protected had a name: Jesus Christ, who is the Truth incarnate. As Knights, we too must serve this truth. This is not easy in our day. As was the case for Blessed Michael McGivney, we live in a time of bigotry and intolerance. Key truths — truths about marriage, about life in the womb, about the nature of the family and the meaning of freedom — are often denied and even vilified. Yet, this makes our commitment to truth all the more important. We stand for these truths, for what is truly right, truly just and truly loving.”
Supreme Knight Kelly further noted that Knights are called to have a special devotion to the Blessed Sacrament. “The more we dedicate ourselves to Christ in the Eucharist,” he said, “the more we will be a sign of unity in an age of division and disbelief.”
He concluded his remarks by urging all members of the Order to ask for the intercession of St. Joseph and Blessed Michael McGivney, asking for “the grace to commit ourselves more fully to Christ.”
“We will be a sign of unity in this age, and a source of light and courage for the men and families living in these challenging times,” he said. “It is a high calling, and like previous generations of Knights, the time has come for us to answer the call, out of love for Christ and his Church.”
The ceremony concluded with the conferral of medals of office on the deputy supreme knight, supreme secretary, new supreme directors and state deputies.
Release: Knights of Columbus - Photo Screenshot same