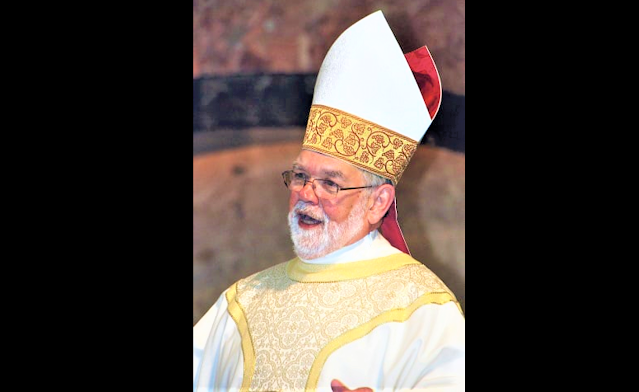 Pope Francis Accepts Resignation of Auxiliary Bishop George Sheltz
JUNE 22, 2021 WASHINGTON—
Pope Francis has accepted the resignation of the Most Reverend George A. Sheltz, 75, from the Office of Auxiliary Bishop of Galveston-Houston. The resignation was publicized in Washington on June 22, 2021 by Archbishop Christophe Pierre, apostolic nuncio to the United States. ##Source;: USCCB
Bishop Sheltz, though retired, will continue to temporarily serve as Chancellor and Moderator of the Curia. (Noted by Archdiocese of Galveston-Houston)
Biography of Most Reverend George Arthur Sheltz
His sacred life began and soared entirely within the confines of his home city. He heard God’s call to religious life and bravely accepted the journey through the process of discernment to his final vows. He continued a family legacy of vocations that would include his father, brother, and uncle. He committed to a Roman Catholic apostolic of common table, common prayer, and a common mission dedicating his life to Him.
He humbly stands as the Auxiliary Bishop of Galveston-Houston. But the namesakes and position titles are not the clues to his identity. Not how he dresses, where he works, or where he lives. Rather, it’s his commitment to sacramental life, a spirit of hospitality, and self-emptying through service.
A lifetime passion to exude goodness, discipline, and knowledge. Bishop George Sheltz was born and raised in Houston with deep connections in the Catholic Church. His father George Sheltz Sr. ‘37 was in the first class of deacons ordained for the diocese. Uncle Monsignor Anton Frank ‘26 was the first native Houstonian ordained for the diocese. His late brother Anton Sheltz ‘68 was ordained for Galveston-Houston in 1976. The path for Sheltz first took root at Annunciation Catholic School. He was inspired and encouraged to pursue the priesthood by the St. Thomas Basilian Fathers. Sheltz entered St. Mary’s Seminary, graduated from the University of St. Thomas with a Bachelor of Arts in philosophy, and earned a Master’s from the seminary in theology. In May 1971, he was ordained for the then-Diocese of Galveston-Houston. Bishop Sheltz then spent nearly four distinguished decades serving with concentrated excellence as the spiritual shepherd for six parishes – Assumption Church, Sacred Heart Co-Cathedral, St. Vincent de Paul Church, Christ the Redeemer Church, Prince of Peace Church, and St. Anthony of Padua Church. In 2000, Pope John Paul II named Bishop Sheltz a prelate of honor with the title of monsignor. He proved to be an integral part of the Church’s chancery in a depth of important roles while making a significant and lasting impact for the largest Roman Catholic diocese in Texas and the 5th largest in the United States – secretariat director for clergy formation, chaplaincy services, vicar general, chancellor, and moderator of the curia. In February 2012, he was appointed to auxiliary bishop of Galveston-Houston by Pope Benedict XVI, filling a position that has been vacant for two years and assisting Cardinal Daniel DiNardo in an archdiocese with more than one million Roman Catholics in a 10-county region. Bishop Sheltz left St. Thomas as a student armed with a superb education, a vibrant and robust appetite for intellectual life, and a serious, undeterred faith. He returns to his Eagle home to enter the school’s precious Hall of Honor having achieved a sublime level of devotion. His dedication has brought inspiration to so many of those around him, a genuine model for the divine life. One that is joyful, intentional, and fulfilled – a galvanizing presence for Houston’s Catholic community.
Source: https://www.sths.org/2021/01/19/st-thomas-st-thomas-hall-of-honor-most-reverend-george-sheltz-transformative-leaders-embracing-basilian-spirit/