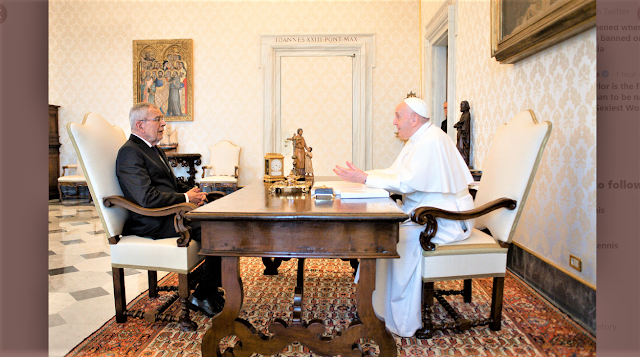 The President of Austria, Alexander Van der Bellen, visited Pope Francis at the Vatican. According to Rome Reports, it is the second meeting between the two.
"I am glad that we are meeting for a second time". President Van der Bellen surprised the Pope by giving him 20 goats as a gift, though he only brought photos of them to the Vatican. The goats will be given to families in Burundi through the charity Caritas.
"This is a message, a message". In return the Pope gave him a mosaic of Noah caring for nature. "Creation opens paths to salvation".
He was accompanied during his visit by his wife, Doris Schmidauer. (Edited from Romereports)
Vatican release:

This morning the Holy Father Francis received in audience, in the Vatican Apostolic Palace, the President of the Republic of Austria, His Excellency Alexander Van der Bellen, who subsequently met with His Eminence Cardinal Secretary of State Pietro Parolin, accompanied by His Excellency Archbishop Paul Richard Gallagher, Secretary for Relations with States.

During the cordial discussions, appreciation for the good relations between the Holy See and Austria was expressed.

Attention then turned to geopolitical issues, at European and international levels, and the parties highlighted the role of the Church in the promotion of solidarity in favour of peace and universal fraternity, and in the care of creation.