Pope Francis says "...let us keep fixed in our hearts and minds that encounter with grace, when God changed our existence." FULL TEXT + Video 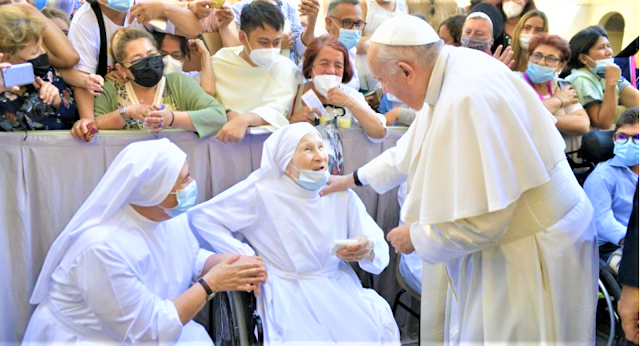 Let us enter into the Letter to the Galatians a little at a time. We have seen that these Christians find themselves in conflict on how to live the faith. The apostle Paul begins to write his Letter reminding them of their past relationship, his unease at being far from them, and the unchanging love he retains for each one of them. However, he does not fail to point out his concern that the Galatians should follow the correct path: it is the concern of a father, who has generated the communities in the faith. His intention is very clear: it is necessary to reiterate the novelty of the Gospel, which the Galatians have received through his preaching, to build the true identity on which to base their existence. And this is the principle: to reaffirm the newness of the Gospel, of that which the Galatians received from him.

We immediately discover that Paul has a profound knowledge of the mystery of Christ. From the beginning of his Letter he does not follow the low arguments used by his detractors. The Apostle “flies high” and shows us, too, how to behave when conflicts arise within the community. Only towards the end of the Letter, in fact, is it made explicit that at the heart of the diatribe is the question of circumcision, hence of the main Jewish tradition. Paul chooses to go deeper, because what is at stake is the truth of the Gospel and the freedom of Christians, which is an integral part of it. He does not stop at the surface of the problems, of conflicts, as we are often tempted to do in order to find an immediate solution that deludes us into thinking that we can all agree with a compromise. Paul loves Jesus and knows that Jesus is not a man, a God of compromises. This is not how the Gospel works, and the Apostle chose to take the more challenging route. He writes: “Am I now seeking human approval, or God’s approval?” He does not try to make peace with everyone. And he continues: “Or am I trying to please people? If I were still pleasing people, I would not be a servant of Christ” (Gal 1:10).

Firstly, Paul feels his duty to remind the Galatians that he is a true apostle not by his own merit, but by God’s calling. He recounts the story of his vocation and conversion, which coincided with the apparition of the Risen Christ during the journey to Damascus (cf. Acts 9:1-9). It is interesting to observe what he affirms of his life prior to that event. And this is what he says, about his “former” life: “I was violently persecuting the church of God and was trying to destroy it. I advanced in Judaism beyond many among my people of the same age, for I was far more zealous for the traditions of my ancestors” (Gal 1:13-14). Paul dared to affirm that in Judaism he surpassed all others, he was a truly zealous pharisee, “as for righteousness based on the law, faultless” (Phil 3:6). Twice he emphasises that he was a defender of the “traditions of the fathers” and a “staunch upholder of the law”. This is the story of Paul.

On the one hand, he insists in underlining that he had fiercely persecuted the Church and that he had been a “blasphemer, a persecutor, and a man of violence” (1 Tim 1:13). He spares no adjectives: he himself describes himself in this way. On the other hand, he highlights God’s mercy towards him, which led him to experience a radical transformation, well know to all. He writes: “I was still unknown by sight to the churches of Judea that are in Christ; they only heard it said, ‘The one who formerly was persecuting us is now proclaiming the faith he once tried to destroy’” (Gal 1, 22-23). He converted, he changed, he changed his heart. Paul thus highlights the truth of his vocation through the striking contrast that had been created in his life: from being a persecutor of Christians for not observing the traditions and the law, he was called to become an apostle to proclaim the Gospel of Jesus Christ. But we see that Paul is free: he is free to proclaim the Gospel and he is also free to confess his sins. “I was like that”: it is the truth that gives freedom to the heart, and it is the freedom of God.

Thinking back on this story, Paul is full of wonder and gratitude. It is as if he wanted to tell the Galatians that he could have been anything but an apostle. He had been brought up as a boy to be a blameless observer of the Mosaic Law, and circumstances had led him to fight the disciples of Christ. However, something unexpected had happened: God, by His grace, had revealed to him His Son who had died and rose again, so that he could become a herald among the Gentiles (cf. Gal 1:15-6).

How inscrutable are the ways of the Lord! We experience this every day, but especially if we think back to the times when the Lord called us. We must never forget the time and the way in which God entered our lives: let us keep fixed in our hearts and minds that encounter with grace, when God changed our existence. How often, in the face of the Lord’s great works, does the question arise: but how is it possible that God uses a sinner, a frail and weak person, to do His will? And yet, none of this happens by chance, because everything has been prepared in God's plan. He weaves our history, the story of each one of us: He weaves our history and, if we correspond with trust to His plan of salvation, we realise it. The calling always implies a mission to which we are destined; that is why we are asked to prepare ourselves seriously, knowing that it is God Himself who sends us, it is God Himself who supports us with His grace. Brothers and sisters, let us allow ourselves to be led by this awareness: the primacy of grace transforms existence and makes it worthy of being placed at the service of the Gospel. The primacy of grace covers all sins, changes hearts, changes lives, and makes us see new paths. Let us not forget this. Thank you.

I cordially greet the English-speaking faithful. I pray that the coming summer holidays will be a time of refreshment and spiritual renewal for you and your families. Upon all of you I invoke the joy and peace of the Lord. May God bless you!