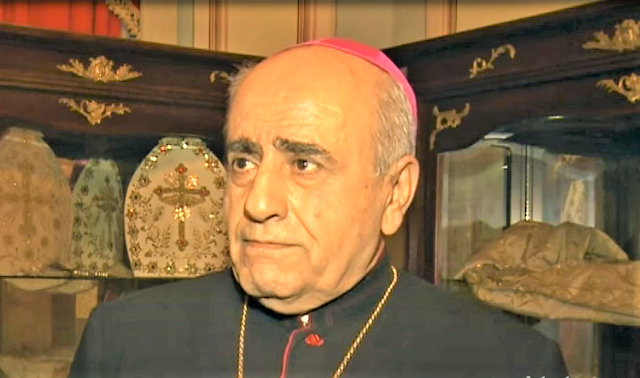 AsiaNews reports that the Syrian Catholic Archbishop Emeritus Jacques Behnan Hindo of the Archeparchy of Hassaké-Nisibi (north-eastern Syria) passed away on June 6th, 2021, in France after a long illness.
Fr Amer Kassar, Syro-Catholic priest of the Church of Our Lady of Fatima in Damascus, remembers the late prelate as “A man of God in the difficult time of war, a bishop who stayed with his people even when Daesh (Islamic State) entered his city. He was a great witness for us Christians, even for priests, reminding us not to flee, to remain with our people”.
“When Archbishop Hindo went abroad and met politicians and government leaders, he always demanded justice for the Syrian people and their country, battered by war. He played a leading role in this as well,” Fr Kassar told AsiaNews.
Archbishop Hindo was born on 8 August 1941 and was ordained a priest on 4 May 1969. He was appointed Archbishop of Hassaké-Nisibi in 1996, and ordained on 18 June 1997.
Although he resigned on 22 June 2019 for health reasons and for reaching age limits, he never stopped speaking out on behalf of Christians and the Syrian people until his death from illness yesterday in Paris, France, where he had travelled for medical treatment.
In the past, he had campaigned against abuses by the Kurdish authorities and the closure of some Christian schools in Kurdish-controlled north-eastern Syria, which Damascus does not recognise as a separate, autonomous entity.
Local authorities closed some educational establishments in the cities of Qamishli, Darbasiyah and Malikiyah for failing to apply the curriculum imposed by Kurdish regional leaders.
At the time, Archbishop Hindo slammed the local administration for preventing the schools from teaching “in the language of the Church, ancient Syriac” and opposed “the teaching of history” slanted towards the views of the authorities.
In 2015, at the darkest moment of the conflict, the prelate attacked what he called the “ambiguous policy” of the United States, which favoured the rise of Islamic State (IS) group in the area straddling the border of Syria and Iraq.
When IS was only three kilometres and threatening him, he accused US planes of targeting Syrian government forces rather than IS fighters.
“It's not about being for or against the government,” he said at the time, “but people never believed in America’s attacks. Only the Kurds have really fought on the ground, but to hold their ground.”
“I knew the bishop very well,” Fr Kassar said. He was “a figure of great value during the war. He played a mediating role between Arabs and Kurds, between Muslims and Christians, always remaining in Hassaké, which he did not abandon even when IS was at its doorstep.
“In addition, he promoted several projects to help local development and dialogue, bridging the gap between different points of view, opinions and groups sometimes very distant from each other. He was a man of God, who knew the area well and the people who inhabited it.”
One of the projects the prelate promoted, and which Fr Kassar liked, involved housing for young people “to counter the depopulation of Christian areas, one of the sore notes of the war years. Likewise, he helped Caritas, schools and education, which he considered essential for the future of the community.”
Meanwhile, reports from the Kurdish-majority area indicate that a Christian journalist and human rights activist was abducted last week, a sign of persistent instability.
Husam al-Qass was seized in Derik (Hassaké Governorate) by a dozen men with their faces covered and whose identity remains unknown at present.
In a statement, the journalist's family describes the kidnapping as “politically motivated” and linked “to his political activity” as well as his “defence of human rights and freedom of expression”.
Amid a climate of tension, the local Arab population is increasingly impatient with “the so-called Kurdish autonomous administration”.
Hisham himself had written and expressed support for the residents of Manbij, whose protests were forcibly suppressed by the Kurdish authorities, with at least eight protesters killed.
Previously, he had given voice to the people of Afrin, attacked by the Turkish army that controls a portion of Syrian territory.
Edited from Asia News IT