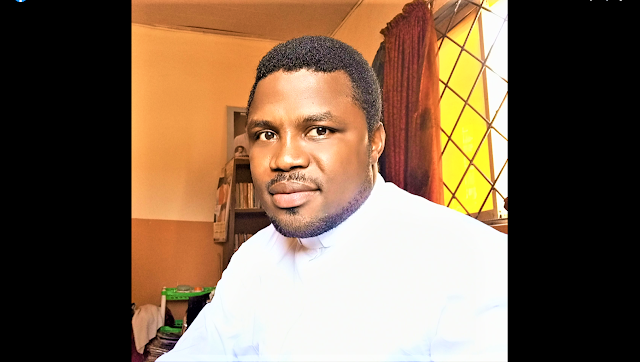 Bishop of Maiduguri, confirmed to Fides, the kidnapping of Fr. Elijah Juma Wada, on June 30, 2021. The priest, who serves at the parish of Buma in Shani, was on his way to Damaturu to attend the thanksgiving mass for the 10th anniversary of his friend, Father Yakubu Inda Philibus. (Image of Fr. Elijah from his Facebook page)
The kidnappers are suspected of belonging to Boko Haram, the Islamist group that was founded in Maiduguri in 2009, but has split into various factions in recent years.  Priests and nuns have  suffered kidnapping, despite the fact that for years the Nigerian Bishops' Conference has forbidden the payment of ransoms. (Fides report)
In addition to this, suspected Fulani herdsmen kidnapped most of the over 150 students at a Christian high school in Kaduna state, Nigeria, sources said. (SEE Video below)
Morning Star news reports that, shooting wildly, the armed assailants breached the walls of Bethel Baptist High School in Maraban Rido, on the outskirts of the city of Kaduna at about 2 a.m. This occurred on Monday, July 5, 2021, and they took the students in the school hostel away at gunpoint, according to area residents.
Established by the Bethel Baptist Church in Kaduna, a member church of the Nigerian Baptist Convention (NBC), the school was attacked after the kidnappers overcame some security personnel, sources said. It was the latest of a series of attacks on schools and colleges that have increased this year.
The Rev. Joseph Hayab, a Baptist minister and Kaduna state chairman of the Christian Association of Nigeria (CAN), said his son was among those who narrowly escaped. Many of the students remain unaccounted for, and efforts were still underway to determine the total number of students missing, he said.
“The armed bandits kidnapped many students; right now I’m speechless,” Pastor Hayab told Morning Star News. “The school is an educational ministry of my church. This is a very, very sad situation for us.”
Omonigho Stella, another area resident, told Morning Star News by text message, “Please let us pray for divine intervention.”
Nigeria led the world in number of kidnapped Christians last year with 990. In Open Doors’ 2021 World Watch List list of the countries where it is most difficult to be a Christian, Nigeria broke into the top 10 for the first time, jumping to No. 9 from No. 12 the previous year.
“They adopt a comparable strategy to Boko Haram and ISWAP [Islamic State West Africa Province] and demonstrate a clear intent to target Christians and potent symbols of Christian identity,” the APPG report states.
The U.S. State Department on Dec. 7 added Nigeria to its list of Countries of Particular Concern for engaging in or tolerating “systematic, ongoing, egregious violations of religious freedom.” (Morningstarnews.org)

Gunmen kidnapped about 150 students from a boarding school in Nigeria's Kaduna state, the latest in a wave of mass abductions targeting schoolchildren for ransom https://t.co/NXZVQIkKV2 pic.twitter.com/6EubC34Txj