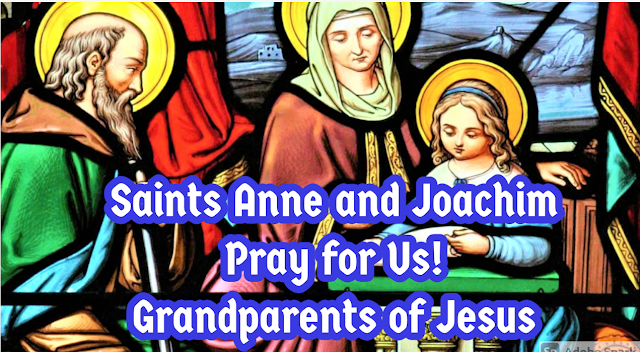 Memorial of Saints Joachim and Anne, Parents of the Blessed Virgin Mary
Lectionary: 401
Reading I
Ex 32:15-24, 30-34
Moses turned and came down the mountain
with the two tablets of the commandments in his hands,
tablets that were written on both sides, front and back;
tablets that were made by God,
having inscriptions on them that were engraved by God himself.
Now, when Joshua heard the noise of the people shouting,
he said to Moses, “That sounds like a battle in the camp.”
But Moses answered, “It does not sound like cries of victory,
nor does it sound like cries of defeat;
the sounds that I hear are cries of revelry.”
As he drew near the camp, he saw the calf and the dancing.
With that, Moses’ wrath flared up, so that he threw the tablets down
and broke them on the base of the mountain.
Taking the calf they had made, he fused it in the fire
and then ground it down to powder,
which he scattered on the water and made the children of Israel drink.
Moses asked Aaron, “What did this people ever do to you
that you should lead them into so grave a sin?”
Aaron replied, “Let not my lord be angry.
You know well enough how prone the people are to evil.
They said to me, ‘Make us a god to be our leader;
as for the man Moses who brought us out of the land of Egypt,
we do not know what has happened to him.’
So I told them, ‘Let anyone who has gold jewelry take it off.’
They gave it to me, and I threw it into the fire, and this calf came out.”
On the next day Moses said to the people,
“You have committed a grave sin.
I will go up to the LORD, then;
perhaps I may be able to make atonement for your sin.”
So Moses went back to the LORD and said,
“Ah, this people has indeed committed a grave sin
in making a god of gold for themselves!
If you would only forgive their sin!
If you will not, then strike me out of the book that you have written.”
The LORD answered, “Him only who has sinned against me
will I strike out of my book.
Now, go and lead the people to the place I have told you.
My angel will go before you.
When it is time for me to punish, I will punish them for their sin.”
Responsorial Psalm
106:19-20, 21-22, 23
R.     (1a)  Give thanks to the Lord, for he is good.
Our fathers made a calf in Horeb
and adored a molten image;
They exchanged their glory
for the image of a grass-eating bullock.
R.     Give thanks to the Lord, for he is good.
They forgot the God who had saved them,
who had done great deeds in Egypt,
Wondrous deeds in the land of Ham,
terrible things at the Red Sea.
R.     Give thanks to the Lord, for he is good.
Then he spoke of exterminating them,
but Moses, his chosen one,
Withstood him in the breach
to turn back his destructive wrath.
R.     Give thanks to the Lord, for he is good.
Alleluia
Jas 1:18
R. Alleluia, alleluia.
The Father willed to give us birth by the word of truth
that we may be a kind of firstfruits of his creatures.
R. Alleluia, alleluia.
Gospel
Mt 13:31-35
Jesus proposed a parable to the crowds.
“The Kingdom of heaven is like a mustard seed
that a person took and sowed in a field.
It is the smallest of all the seeds,
yet when full-grown it is the largest of plants.
It becomes a large bush,
and the birds of the sky come and dwell in its branches.”
He spoke to them another parable.
“The Kingdom of heaven is like yeast
that a woman took and mixed with three measures of wheat flour
until the whole batch was leavened.”
All these things Jesus spoke to the crowds in parables.
He spoke to them only in parables,
to fulfill what had been said through the prophet:
I will open my mouth in parables,
I will announce what has lain hidden from the foundation of the world.
Prayer to make Spiritual Communion:
People who cannot communicate now make spiritual communion.At your feet, O my Jesus I bow down and offer you the repentance of my contrite heart, which abysses itself into its nothingness and Your holy presence. I adore you in the Sacrament of Your love, the ineffable Eucharist. I wish to receive you in the poor home that my heart offers you. In anticipation of the happiness of sacramental communion, I want to possess you in spirit. Come to me, oh my Jesus, that I may come to you. May Your love inflame my whole being, for life and death. I believe in you, I hope in you, I love you. So be it. Amen