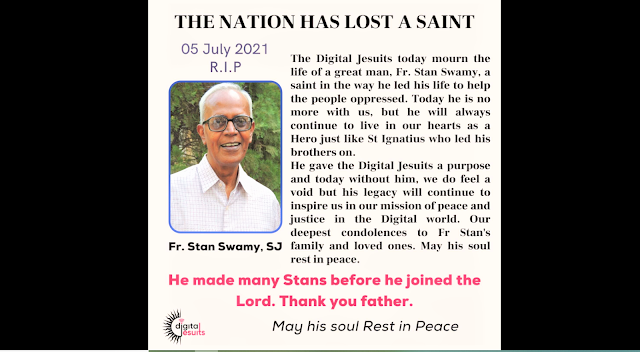 The Jesuits of South Asia have reported the death of  Jesuit Fr. Stan Swamy in India. He was accused in a 2018 incident of caste-based violence.
The tribal rights activist Stan Swamy died of a cardiac arrest in  Mumbai city. He was 84 years old. His full name was Stanislaus Louduswamy, and he was born on the 26th of April 1937 and died on the 5th of July 2021.
Fr. Stan suffered from Parkinson's disease. He was moved to a private hospital in May after he tested positive for Covid-19.
The Jesuit priest, was arrested in October 2020.
He was among 15 renowned activists, academics and lawyers, who were charged under the anti-terror law.
Fr. Swamy had often denied the charges.
Here is his last public message before death:
The accusations were related to violence that broke out in 2018 during an event honoring a historic battle fought by Dalits  against an upper-caste rule.
He spent eight months in Mumbai's Tajola jail, and his health declined so that he could not even eat or bathe by himself.
His parents were from the southern state of Tamil Nadu, Fr. Swamy was the head of a school for training leaders of marginalised communities in Bangalore for over a decade.
He fought for the rights of indigenous tribes or adivasis in Jharkhand.
He moved the high court in the state seeking the release of 3,000 young men and women who were suffering in prison after being named Maoists.
Press Release from the Jesuits:

Jesuit priest and human rights activist Stan Swamy passed away in Mumbai on July 5 at 1.30 pm. He was 84. Swamy was undergoing treatment at the intensive care unit of the Holy Family Hospital, where he was shifted from the Taloja prison in Navi Mumbai following a High Court order on May 28 this year. Incidentally, the Bombay High Court was hearing some petitions, seeking bail and a constitutional challenge to a section of UAPA, on July 5 when his lawyer announced Stan Swamy’s death. He was on life support due to his deteriorating condition. Although the hearing was adjourned to July 6, his lawyer announced Stan’s passing. “It is with a very heavy heart that I have to inform you that father Stan Swamy has passed away,” said Dr D’Souza, the medical director, reported Live Law. He suffered a cardiac arrest at 4.30 am on Saturday, and deteriorated thereafter.