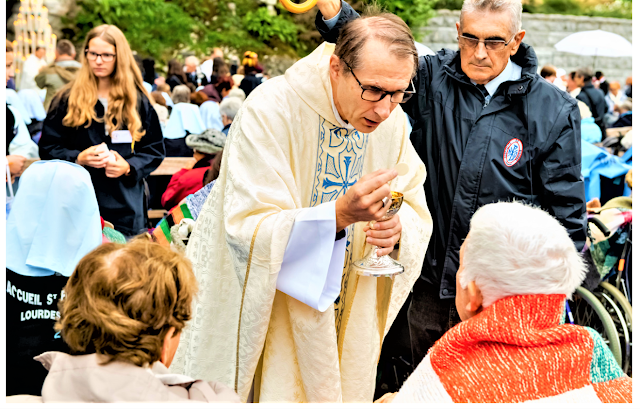 Resignation and appointment of the Bishop of Nîmes (France)
The Holy Father accepted the resignation from the pastoral care of the Diocese of Nîmes (France) presented by HE Mons. Robert Wattebled.
The Holy Father has appointed Bishop Nicolas Brouwet, currently Bishop of Tarbes et Lourdes, as Bishop of Nîmes (France).
Curriculum vitae
HE Mons. Nicolas Brouwet was born on August 31, 1962 in Suresnes, in the Diocese of Nanterre. After his high school studies at the State University, where he obtained a diploma in History (1984), he entered the Pontifical French Seminary in Rome. He attended courses in Philosophy and Theology at the Pontifical Gregorian University , concluding them with a Baccalaureate in Theology. He then enrolled in the John Paul II Institute , obtaining a Licentiate there. In the two-year period 1986-1988 he carried out the civil service in Jerusalem, teaching French.
He was ordained a priest on June 27, 1992 for the Diocese of Nanterre, where he held the following positions: Vice-Parish Priest of Bourg-la-Reine and Sceaux and Chaplain of the State Lyceum in Saint-Gilles of Bourg-la-Reine, as well as the University Center of Sceaux (1993-1999); Pastor of Saint-Romain and Notre-Dame-des-Bruyères and Dean of Sèvres (1999-2006); Dean of Chaville-Sèvres-Ville-d'Avray (2001-2006); Diocesan Delegate for the formation of seminarians of Nanterre (2003-2008); Pastor of Saint-Pierre and Saint Jacques in Neuilly-sur-Seine; Lecturer in Morals and Spiritual Director at the Maison Madeleine Delbrel pre-seminar (2006-2008).
He is a member of the Institut Saint-Jean (Johannesgemeinschaft) founded by Cardinal Hans Urs von Balthasar.
Elected titular bishop of Simiddica and appointed auxiliary of Nanterre on 11 April 2008, he was consecrated the following 29 June 2008. He was transferred to the See of Tarbes et Lourdes on 11 February 2012.
Within the Conference of Bishops of France he is a member of the Council for Movements and Associations of the Faithful.
Source: https://press.vatican.va/content/salastampa/it/bollettino/pubblico/2021/08/10/0494/01061.html