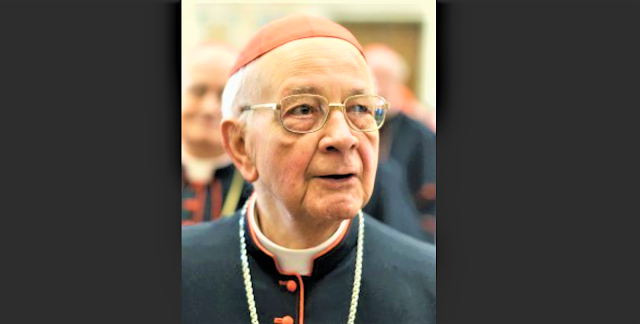 Cardinal Eduardo Martinez Somalo died in the Vatican on Tuesday, August 10, 2021, at the age of 94, following a long and distinguished career in service of the Holy See. He had suffered a heart attack last month.  Cardinal Somalo was the head of the administration of the Holy See as camerlengo between the death of St. Pope John Paul II and the election of Pope Benedict XVI in 2005.
A camerlengo, or chamberlain, runs the ordinary affairs of the Vatican city-state during the period known as the “sede vacante” (empty seat).
Biography of Cardinal Martinez Somalo Eduardo
Cardinal Eduardo Martínez Somalo, Prefect emeritus of the Congregation for Institutes of Consecrated Life and Societies of Apostolic Life, Camerlengo emeritus of the Holy Roman Church, was born on 31 March 1927, in a small town of Baños de Rio Tobia, province of Rioja and diocese of Calahorra y La Calzada-Logrono. After having attended the diocesan seminary, he was invited to Rome to continue his ecclesiastical studies at the Pontifical Spanish College and at the Pontifical Gregorian University, obtaining a licentiate in theology and in canon law.
Ordained a priest on 19 March 1950, he carried out his pastoral ministry in his native diocese. He was then sent to Rome, once again, to attend courses at the Pontifical Ecclesiastical Academy and to prepare himself to serve as pontifical representative of the Holy See. Receiving on 18 August 1956 a doctorate in canon law from the Pontifical Lateran University with a thesis on the Spanish concordat of 1953 in the light of its first two articles, he entered the Secretariat of State.
The following year he was promoted to secretary of the nunciature and nominated professor at the Pontifical Ecclesiastical Academy. Being responsible for the Spanish section of the Secretariat of State, he accompanied Pope Montini to Colombia from 22-25 August 1968 on the occasion of the 39th Eucharistic International Congress.
Two years later, 25 April 1970, he was nominated counsellor of the apostolic delegation to Great Britain. But his distance from Rome lasted only a few months. On 14 May 1970 he was nominated Prelate of Honour of the His Holiness, on 9 October that same year he was recalled to the Vatican as Assessor of the Secretariat of State and therefore direct collaborator of the then substitute of the Secretariat of State, Archbishop Giovanni Benelli. During this entire period Mons. Martínez Somalo, even with his commitments, carried out an intense pastoral ministry, dedicating himself in a particular way to the world of the suffering.
On 12 November 1975, Paul VI elected him titular Archbishop of Tagora, at the same time nominating him Apostolic Nuncio in Colombia. Cardinal Jean Villot, the then Secretary of State, conferred episcopal ordination on 13 December of the same year, during a solemn Eucharistic celebration in St. Peter’s Basilica in the Vatican.
About four years as pontifical representative, John Paul II nominated him on 5 May 1979 Substitute of the Secretariat of State, a position which he held until he was made a Cardinal. Tireless in his faithful service to the See of Peter, Archbishop Martínez Somalo was always beside John Paul II during his numerous apostolic pilgrimages in Italy and in the world.
President Delegate to the 1st Special Assembly for Europe of the Synod of Bishops (1991).
President Delegate to the 9th General Assembly of the Synod of Bishops on Consecrated Life (1994).
Prefect of the Congregation of Divine Worship and Sacraments, 1 July 1988 - 21 January 1992.
Prefect of the Congregation for Institutes of Consecrated Life and Societies of Apostolic Life, 21 January 1992-11 February 2004.
Camerlengo of the Holy Roman Church, 5 April 1993 - 4 April 2007.
He participated in the conclave of April 2005, which elected Pope Benedict XVI.
Created and proclaimed Cardinal by St. John Paul II in the consistory of 28 June 1988, of the Title of SS. Nome di Gesù (Most Holy Name of Jesus), deaconry elevated pro hac vice to presbyteral title.
Source: https://press.vatican.va/content/salastampa/en/documentation/cardinali_biografie/cardinali_bio_martinez-somalo_e.html