RIP Fr. Angel Sotelo - Death of Beloved Catholic Priest and Facebook Friend to Many after Long Battle with Cancer 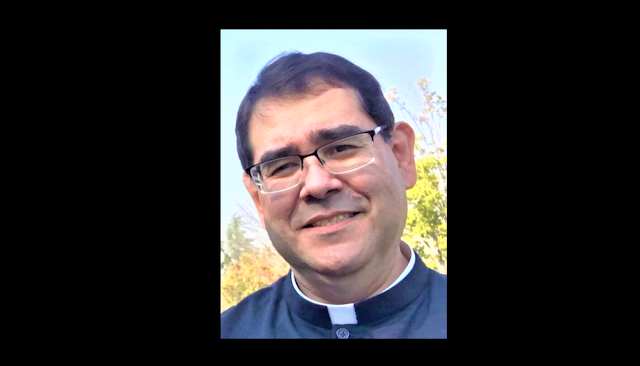 Fr. Angel Sotelo, a Catholic priest from California, was a common commentator on Facebook. He was the Facebook friend to many often offering prayers and encouragement. Fr. Angel suffered from esophageal cancer and succumbed to his illness on August 1st, 2021. Please pray for the repose of his soul.

Reverend Angel Louis Sotelo, pastor of St. Columba Church, in Chowchilla California, passed away on August 1, 2021. He was 56. Father Sotelo was born in Chicago, Illinois August 29, 1964. He grew up with his family living in San Diego and Parlier. They finally settled in Hanford, California, where he attended elementary and middle school. He graduated from Hanford High School in 1982. While in high school, he excelled in shorthand and typing and competed statewide. At one time he was one of the top three fastest stenographers and typists in the state.

Father Angel loved movies and saw many different genres: comedy, horror and dramas. He could cook and it wasn’t uncommon to find baked chicken, chile verde and pozole ready to eat. He hosted many family gatherings, especially Thanksgiving. We will miss hearing him say grace and ending it with “Atacar!” Thanksgiving was Pets-giving and family could bring their dogs. He loved his German Shepherds, Monstro, Princess and Niño, who we fondly remember. In the last years of his life, he adopted a cat, Kitty, who he adored and Momma Cat, who was the resident mouse catcher. His dog Colt remained a faithful companion until the end.

Some of the family memories included a young Fr. Angel playing priest. He would get a drinking glass and to our mom’s dismay, make “hosts” from the bread reserved for our dad’s lunch. He would then tie a blanket around his neck for a vestment and serve Mass.

Father Angel was very generous with family. While visiting his sister in Florida, he took his niece and nephews to Disneyworld. When having dinner at a restaurant, he liked to order for you- whether you liked it or not. He was a master delegator and had a way of getting you to help, such as cleaning the bathrooms of the former Ryan Prep Seminary or helping him fill out thank you notes.

He loved music and it wasn’t uncommon to hear Mary J. Blige or U2’s Sunday Bloody Sunday playing in his car. He loved to travel and visited Spain and Italy. He liked to visit friends in Southern California and loved the Monterey area where he would often go to relax.

Many parishioners, old and young, will miss him dearly. He used social media as a vehicle to educate on religious topics or current events. Facebook will never be the same.

Father Angel is preceded in death by his mother, Thereza C. Sotelo.