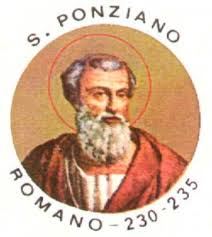 Dates of birth and death unknown. The "Liber Pontificalis" (ed. Duchesne, I, 145) gives Rome as his native city and calls his father Calpurnius. With him begins the brief chronicle of the Roman bishops of the third century, of which the author of the Liberian Catalogue of the popes made use in the fourth century and which gives more exact data for the lives of the popes. According to this account Pontian was made pope 21 July, 230, and reigned until 235. The schism of Hippolytus continued during his episcopate; towards the end of his pontificate there was a reconciliation between the schismatic party and its leader with the Roman bishop. After the condemnation of Origen at Alexandria (231-2), a synod was held at Rome, according to Jerome (Epist. XXXII, iv) and Rufinus (Apol. contra Hieron., II, xx), which concurred in the decisions of the Alexandrian synod against Origen; without doubt this synod was held by Pontian (Hefele, Konziliengeschichte, 2nd ed., I, 106 sq.). In 235 in the reign of Maximinus the Thracian began a persecution directed chiefly against the heads of the Church. One of its first victims was Pontian, who with Hippolytus was banished to the unhealthy island of Sardinia. To make the election of a new pope possible, Pontian resigned 28 Sept., 235, the Liberian Catalogue says "discinctus est". Consequently Anteros was elected in his stead. Shortly before this or soon afterwards Hippolytus, who had been banished with Pontian, became reconciled to the Roman Church, and with this the schism he had caused came to an end. How much longer Pontian endured the sufferings of exile and harsh treatment in the Sardinian mines is unknown. According to old and no longer existing Acts of martyrs, used by the author of the "Liber Pontificalis", he died in consequence of the privations and inhuman treatment he had to bear. Pope Fabian (236-50) had the remains of Pontian and Hippolytus brought to Rome at a later date and Pontian was buried on 13 August in the papal crypt of the Catacomb of Callistus. In 1909 the original epitaph was found in the crypt of St. Cecilia, near the papal crypt. The epitaph, agreeing with the other known epitaphs of the papal crypt, reads: PONTIANOS, EPISK. MARTUR (Pontianus, Bishop, Martyr). The word mártur was added later and is written in ligature [cf. Wilpert, "Die Papstgräber und die Cäciliengruft in der Katakombe des hl. Kalixtus" (Freiburg, 1909), 1 sq., 17 sq., Plate III]. He is placed under 13 Aug. in the list of the "Depositiones martyrum" in the chronographia of 354. TheRoman Martyrology gives his feast on 19 Nov.