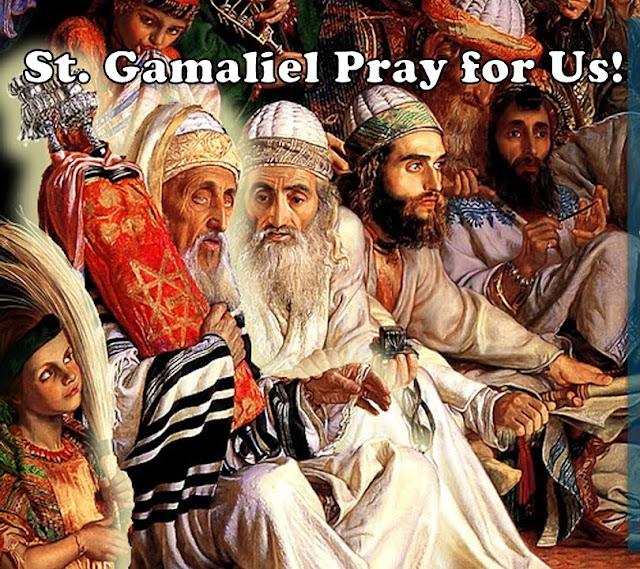 (Greek form of the Hebrew name meaning "reward of God"). The name designates in the New Testament a Pharisee and celebrated doctor of the Law. Gamaliel is represented in Acts 5:34 sqq., as advising his fellow-members of the Sanhedrin not to put to death St. Peter and the Apostles, who, notwithstanding the prohibition of the Jewish authorities, had continued to preach to the people. His advice, however unwelcome, was acted upon, so great was his authority with his contemporaries. We learn from Acts 22:3, that he was the teacher of St. Paul; but we are not told either the nature or the extent of the influence which he exercised upon the future apostle of the Gentiles. Gamaliel is rightly identified with an illustrious Jewish doctor of the Law, who bore the same name and died eighteen years before the destruction of Jerusalem. In the Talmud, this Gamaliel bears, like his grandfather Hillel, the surname of "the Elder", and is the first to whom the title "Rabban", "our master", was given. He appears therein, as in the book of the Acts, as a prominent member of the highest tribunal of the Jews. He is also treated as the originator of many legal ordinances; as the father of a son, whom he called Simeon, after his father's name, and of a daughter who married the priest Simon ben Nathanael. The Jewish accounts make him die a Pharisee, and state that: "When he died, the honour of the Torah (the law) ceased, and purity and piety became extinct." At an early date, ecclesiastical tradition has supposed that Gamaliel embraced the Christian Faith, and remained a member of the Sanhedrin for the purpose of helping secretly his fellow-Christians (cf. Recognitions of Clement, I, lxv, lxvi). According to Photius, he was baptized by St. Peter and St. John, together with his son and with Nicodemus. His body, miraculously discovered in the fifth century, is said to be preserved at Pisa, in Italy. the Catholic Encyclopedia