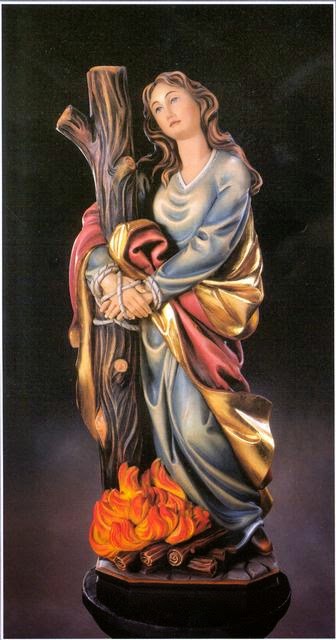 Today, August 5, we celebrate the feast day of Saint Afra (died 304), Martyr of the Church. Saint Afra worked as a prostitute, but kindly hid her local bishop during the persecution of Christians. From his influence, she converted to the faith, dedicated herself to acts of charity, and was eventually persecuted and executed for her beliefs. The life of Saint Afra reminds us that true conversion and repentance for past sins is always possible, and that Our Loving Father calls us to Him regardless of the sins we have committed in the past!
Afra was originally a courtesan in the German town of Augsburg, having grown up in Cyprus, and moved to that area.
Upon moving to Ausburg, it is likely that Afra worked in a brothel, possibly close to the pagan Temple of Venus. At the onset of the persecution of Christians under the orders of Emperor Diocletian, Afra and her mother, Hilaria, hid the local bishop from harm. The holy man, Bishop Narcissus of Girona, did not know the profession of Afra and her mother, and through his witness, converted them to the faith. Afra and her mother, as well as her servants, were baptized, and began spending their time in charitable acts to the poor and suffering around them.
Despite the threat of death and persecution, Afra continued to hide the holy bishop until she herself was arrested and brought before the authorities. The judge, Gaius, knew of Afra and her profession, and ordered her to sacrifice to the pagan gods or be condemned to death.

Afra declared: “I was a great sinner before I knew God; but I will not add new crimes, nor do what you command me. My capitol is Jesus Christ, whom I have always before my eyes. I every day confess my sins; and, because I am unworthy to offer him any sacrifice, I desire to sacrifice myself for his name, that this body in which I have sinned may be purified and sacrificed to him by torments.”

Gaius persisted, referencing her former profession, and urging her to recant her faith. “I am informed,” he said, “that you are a prostitute. Sacrifice, therefore, as you are a stranger to the God of the Christians, and cannot be accepted by him.”
But Afra replied, “Our Lord Jesus Christ hath said, that he came down from heaven to save sinners. The gospels testify that an abandoned woman washed his feet with her tears, and obtained pardon, and that he never rejected the publicans, but permitted them to eat with him.”

Gaius said, “Jesus Christ will have nothing to do with you. It is in vain for you to acknowledge him for your God: a common prostitute can never he called a Christian.”

Afra replied, “It is true, I am unworthy to bear the name of a Christian; but Christ hath admitted me to be one.”

Growing frustrated, the judge ordered her again: “Sacrifice to the gods, and they will save you.”
The martyr replied: “My Savior is Jesus Christ, who upon the cross promised paradise to the thief who confessed him. The only subject of my confusion and grief are my sins.”

Having run out of patience, Gaius declared, “I am ashamed that I have disputed so long with you. If you do not comply, you shall die.”

Afra replied: “That is what I desire, if I am not unworthy to find rest by this confession. Let that body which hath sinned undergo torments; but as to my soul, I will not taint it by sacrificing to demons.”

Throwing up his hands, Gaius sentenced Afra to death. “We condemn Afra, a prostitute who hath declared herself a Christian, to be burnt alive, because she hath refused to offer sacrifice to the gods.”
Afra was immediately seized, stripped of her clothing, tied to a stake, and set ablaze. While she burned, she lifter her eyes to heaven and prayed:“O Lord Jesus Christ, Omnipotent God, who camest to call not the righteous, but sinners to repentance, accept now the penance of my sufferings, and by this temporal fire deliver me from the everlasting fire, which torments both body and soul. I return thee thanks, O Lord Jesus Christ, for the honor thou hast done me in receiving me a holocaust for thy name’s sake; thou who hast vouchsafed to offer thyself upon the altar of the cross a sacrifice for the sins of the whole world, the just for the unjust, and for sinners. I offer myself a victim to thee, O my God, who livest and reignest with the Father and the Holy Ghost world without end. Amen.”

Having prayed and handed her life over to her creator, Saint Afra died. Her mother and her servants rescued her body and interred her relics in a selpuchre. In the process of this act they were caught, and refusing to sacrifice to the pagan gods, were likely executed.
Inspired by Saint Afra, today we pray for the conversion of sinners throughout the world, and for our own personal conversion and repentance. Holy Saint Afra, pray for us!

Lord Jesus Christ, most merciful Savior of the world, we humbly beseech You, by Your most Sacred Heart, that all the sheep who stray out of Your fold may in one days be converted to You, the Shepherd and Bishop of their souls, who lives and reigns with God the Father in the unity of the Holy Spirit, world without end.
Amen. Shared from 365Rosaries