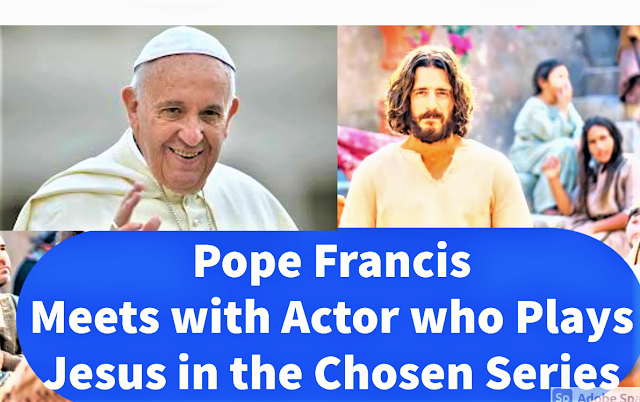 During Pope Francis' General Audience he met actor Jonathan Roumie and director Dallas Jenkins of the Series "The Chosen."
The two were standing in the crowd at the Pope's General Audience in Paul VI Hall at the Vatican. Roumie plays Jesus Christ in “The Chosen,” a popular free online series directed by Jenkins. Roumie spoke to Pope Francis in Spanish and asked him to bless some rosaries. The actor said,“I don't speak a lot of Spanish, but I pray for you all the time.”
The Pope replied, “Thank you very much.” -“Every day. Every day.”
Roumie explained to the Pope, “I have the honor of playing the role of Jesus in the TV series, 'The Chosen.'” He replied, “Well, may you imitate Him, may you find Him, and may He make you happy.” -“Thank you.”
When Pope Francis met director Dallas Jenkins, the Pope joked,  -“This is Jesus. You are Judas?”
Jenkins answered, “No! No no no.” -“I am Protestant, but I am making a show for everyone who loves Jesus.”
“The Chosen” is the largest crowd-funded media show as a mini-s series on the life of Jesus.
Jonathan Roumie, the actor who plays Jesus in  “The Chosen” is a Catholic  and explained on his Instagram (see below) that he made a pilgrimage to St. Padre Pio’s tomb in the Italian town of San Giovanni Rotondo, a few hours drive from Rome.
"The Chosen" cast and crew visited several churches in Rome.