#BreakingNews 40 Christians, Including 12 Children, Killed by Extremists Near Jos, Nigeria 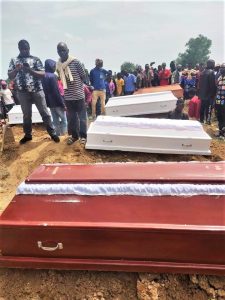 Yelwa Zangam resident Bitrus Pada confirmed that 33 Christians were killed in the attacks in the area, which is near the University of Jos, while several others received hospital treatment for injuries. Pada said he lost two members of his family in the attacks.

“Those of us who survived this attack need urgent supply of food items and temporary shelter, as most of our possessions were burned and looted by the herdsmen,” Pada told Morning Star News.

Johnson Jauro, a top leader of the predominantly Christian Anaguta people in Jos, confirmed the attacks, as did area resident Jeremiah Bulus. Bulus said the herdsmen shot Christians as they slept in their houses at about 10 p.m.

“Corpses have been taken to the mortuary,” Bulus said. “We are still making efforts to recover more corpses from several houses which the herdsmen also set ablaze. The situation is really bad for us.”

Three Christian university students in Jos were killed on Aug. 15 by suspected local Muslims, as were four other Christians in and near Jos in separate attacks, sources said.

The three Christian students of the University of Jos were identified as Doris Bitrus Danboyi, Bagu Christopher and Iyaye Abuma Shedrack. Bitrus Danboyi, a student of the Department of Religion and Philosophy, was killed while returning to campus from her church worship, according to her uncle, Godwin Tengong.

“Islamists killed my niece while she was coming back from church! Let her blood speak!” Tengong said.

Area resident Lilian Madaki said that Bitrus Danboyi was killed around Bauchi Road Junction in Jos on her way back from church. Ayuba Iliya, a member of her Assembly of God church, said in a text message that his wife taught her in Sunday school.

“I watched this girl grow,” Iliya said. “She couldn’t have been above 20, yet the human vampires snuffed life out of her, while the government has kept a conspiratorial silence on the deaths of many more innocent children killed in the heart of town.”

A relative, Saje Daniel Dalyop, said Bitrus Danboyi made a great impact for Christ at only 20 years old.

“She is indeed a martyr,” Dalyob said. “Our loss but Heaven’s gain. Jesus remains Lord.”

The body of Christopher, a history and international studies student at the university, was found Aug. 15 after he had gone missing, said student Atomigba Tordoo.

“He was killed by Muslims in the town,” Tordoo said.

Shedrack, a first-year student of microbiology, was stabbed to death by suspected local Muslims in Jos. Danladi Joshua Adankala, president of the Students’ Union of the University of Jos, said in a text message, “The incident of Sunday, Aug. 15, resulted in the brutal killings of Christian students by some elements guided by inhuman and barbaric philosophies.”

Adankala said two other Christian students of the university, Mafeng Ezekiel and Mangal Joseph, were still missing and three others wounded.

Four other Christians were reportedly killed on Aug. 15 by local Muslims in the Terminus, Yan Trailer and Katako areas in Jos and in Dong, a suburb of the city.

A worship auditorium of the Redeemed Christian Church of God (RCCG) on Bauchi Road in Jos also was set ablaze by local Muslims on Aug. 15, according to Jos North Local Council officials.

The killings reportedly came in retaliation for an Aug. 14 massacre of 25 Fulani Muslim travelers by youths belonging to the predominantly Christian Irigwe ethnic group along Rukuba Road in Jos North County. Reportedly returning from an annual Islamic New Year (Zikr) prayer event in Bauchi state, the travelers were en route to Ikare, Ondo state when they were intercepted and killed by the Irigwes who were retaliating for the prior killing of their kinsmen by suspected Fulani herdsmen.

The Rev. Polycarp Lubo, chairman of the Plateau State Chapter of the Christian Association of Nigeria (CAN), said church leaders were tired of conducting funerals for members killed on a nearly daily basis in Plateau state.

“We are tired of telling Christians to calm down, take it easy, pray,” Pastor Lubo said. “Christians will be in their houses and still get killed while sleeping; I don’t understand this.”

Nigeria was the country with the most Christians killed for their faith last year (November 2019-October 2020), at 3,530, up from 1,350 in 2019, according to Open Doors’ 2021 World Watch List. In overall violence, Nigeria was second only to Pakistan, and it trailed only China in the number of churches attacked or closed, 270, according to the list.

In this year’s World Watch List of the countries where it is most difficult to be a Christian, Nigeria broke into the top 10 for the first time, jumping to No. 9 from No. 12 the previous year.

Numbering in the millions across Nigeria and the Sahel, predominantly Muslim Fulani comprise hundreds of clans of many different lineages who do not hold extremist views, but some Fulani do adhere to radical Islamist ideology, the United Kingdom’s All-Party Parliamentary Group for International Freedom or Belief (APPG) noted in a recent report.

“They adopt a comparable strategy to Boko Haram and ISWAP [Islamic State West Africa Province] and demonstrate a clear intent to target Christians and potent symbols of Christian identity,” the APPG report states.

Christian leaders in Nigeria have said they believe herdsmen attacks on Christian communities in Nigeria’s Middle Belt are inspired by their desire to forcefully take over Christians’ lands and impose Islam as desertification has made it difficult for them to sustain their herds.