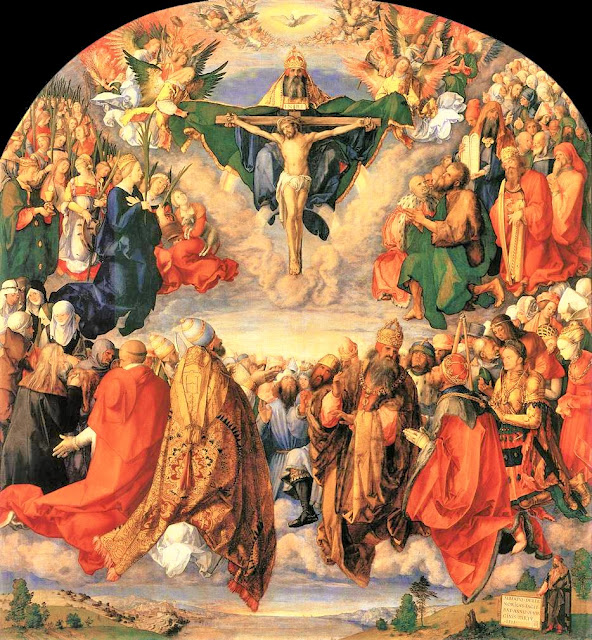 Feast of the Exaltation of the Holy Cross
Lectionary: 638
Reading I
Nm 21:4b-9
With their patience worn out by the journey,
the people complained against God and Moses,
“Why have you brought us up from Egypt to die in this desert,
where there is no food or water?
We are disgusted with this wretched food!”
In punishment the LORD sent among the people saraph serpents,
which bit the people so that many of them died.
Then the people came to Moses and said,
“We have sinned in complaining against the LORD and you.
Pray the LORD to take the serpents from us.”
So Moses prayed for the people, and the LORD said to Moses,
“Make a saraph and mount it on a pole,
and if any who have been bitten look at it, they will live.”
Moses accordingly made a bronze serpent and mounted it on a pole,
and whenever anyone who had been bitten by a serpent
looked at the bronze serpent, he lived.

Responsorial Psalm
78:1bc-2, 34-35, 36-37, 38
R.    (see 7b)  Do not forget the works of the Lord!
Hearken, my people, to my teaching;
incline your ears to the words of my mouth.
I will open my mouth in a parable,
I will utter mysteries from of old.
R.    Do not forget the works of the Lord!
While he slew them they sought him
and inquired after God again,
Remembering that God was their rock
and the Most High God, their redeemer.
R.    Do not forget the works of the Lord!
But they flattered him with their mouths
and lied to him with their tongues,
Though their hearts were not steadfast toward him,
nor were they faithful to his covenant.
R.    Do not forget the works of the Lord!
But he, being merciful, forgave their sin
and destroyed them not;
Often he turned back his anger
and let none of his wrath be roused.
R.    Do not forget the works of the Lord!
Reading II
Phil 2:6-11
Brothers and sisters:
Christ Jesus, though he was in the form of God,
did not regard equality with God something to be grasped.
Rather, he emptied himself,
taking the form of a slave,
coming in human likeness;
and found human in appearance,
he humbled himself,
becoming obedient to death,
even death on a cross.
Because of this, God greatly exalted him
and bestowed on him the name
that is above every name,
that at the name of Jesus
every knee should bend,
of those in heaven and on earth and under the earth,
and every tongue confess that
Jesus Christ is Lord,
to the glory of God the Father.
Alleluia
R. Alleluia, alleluia.
We adore you, O Christ, and we bless you,
because by your Cross you have redeemed the world.
R. Alleluia, alleluia.
Gospel
Jn 3:13-17
Jesus said to Nicodemus:
“No one has gone up to heaven
except the one who has come down from heaven, the Son of Man.
And just as Moses lifted up the serpent in the desert,
so must the Son of Man be lifted up,
so that everyone who believes in him may have eternal life.”
For God so loved the world that he gave his only Son,
so that everyone who believes in him might not perish
but might have eternal life.
For God did not send his Son into the world to condemn the world,
but that the world might be saved through him.
Prayer to Make a Spiritual Communion-People who cannot communicate now make spiritual communion.At your feet, O my Jesus I bow down and offer you the repentance of my contrite heart, which abysses itself into its nothingness and Your holy presence. I adore you in the Sacrament of Your love, the ineffable Eucharist. I wish to receive you in the poor home that my heart offers you. In anticipation of the happiness of sacramental communion, I want to possess you in spirit. Come to me, oh my Jesus, that I may come to you. May Your love inflame my whole being, for life and death. I believe in you, I hope in you, I love you. So be it. Amen