Pope Francis Explains "... in the Gospel there is Jesus' exhortation : instead of judging everything and everyone, let's be careful about ourselves!" FULL TEXT + Video 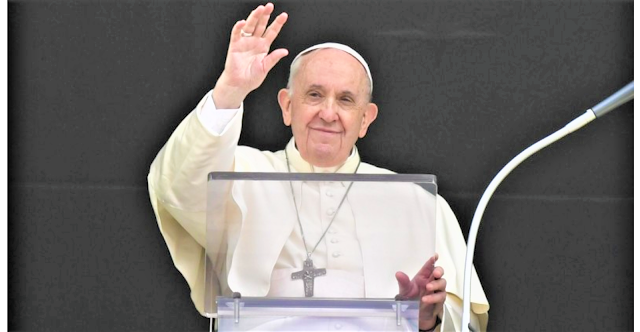 The Gospel of today's Liturgy tells us of a brief dialogue between Jesus and the Apostle John, who speaks on behalf of the whole group of disciples. They saw a man casting out demons in the name of the Lord, but they prevented him from doing so because he was not part of their group. At this point Jesus invites them not to hinder those who work for good, because they contribute to realizing God's plan (cf. Mk 9: 38-41). Then he warns: instead of dividing people into good and bad, we are all called to watch over our hearts, so that we do not succumb to evil and give scandal to others (cf. vv. 42-45.47-48).

In short, Jesus' words reveal a temptation and offer an exhortation . The temptation is that of closure . The disciples would like to prevent a good work only because the one who did it did not belong to their group. They think that they have "exclusive rights over Jesus" and that they are the only ones authorized to work for the Kingdom of God.

But in this way they end up feeling loved and consider others as strangers, to the point of becoming hostile towards them. Brothers and sisters, every closure, in fact, keeps those who do not think like us at a distance and this - we know - is the root of many evils in history: of absolutism that has often generated dictatorships and of so much violence against those who it's different.

But it is also necessary to watch over closure in the Church. Because the devil, who is the divider - this means the word "devil", who makes the division - always insinuates suspicion to divide and exclude people. Try cunningly, and it can happen as with those disciples, who come to exclude even those who had cast out the devil himself! Sometimes we too, instead of being humble and open communities, can give the impression that we are “at the top of the class” and keep others at a distance; instead of trying to walk with everyone, we can show our "believers' license": "I am a believer", "I am Catholic", "I am Catholic", "I belong to this association, to the other ..."; and the other poor people do not. This is a pity. Exhibit the "license of believers" to judge and exclude. We ask for the grace to overcome the temptation to judge and catalog, and that God preserve us from the mentality of the "nest", that of guarding us jealously in the small group of those who consider themselves good: the priest with his faithful, the pastoral workers closed among of them so that no one infiltrates, the movements and associations in their own particular charism, and so on. Closed. All this risks making Christian communities places of separation and not of communion.

And then in the Gospel there is Jesus' exhortation : instead of judging everything and everyone, let's be careful about ourselves! In fact, the risk is to be inflexible towards others and indulgent towards us. And Jesus urges us not to come to terms with evil, with striking images: "If something in you causes a scandal, cut it off!" (cf. vv. 43-48). If something hurts you, cut it off! It does not say: “If something causes a scandal, stop, think about it, get a little better…”. No: “Cut it! Immediately!" Jesus is radical in this, demanding, but for our good, like a good doctor. Each cut, each pruning, is to grow better and bear fruit in love. Let us ask ourselves then: what is it in me that contrasts with the Gospel? What, concretely, does Jesus want me to cut in my life?

Let us pray to the Immaculate Virgin to help us be welcoming to others and vigilant over ourselves.

today we celebrate the World Day of Migrants and Refugees , which this year has as its theme “Towards an ever greater us ”. It is necessary to walk together, without prejudice and without fear, placing ourselves next to those who are most vulnerable: migrants, refugees, displaced persons, victims of trafficking and the abandoned. We are called to build an increasingly inclusive world that excludes no one.

I join with all those in the various parts of the world who are celebrating this Day; I greet the faithful gathered in Loreto for the initiative of the Italian Episcopal Conference in favor of migrants and refugees. I greet and thank the various ethnic communities present here in the square with their flags; I greet the representatives of the “APRI” project of the Italian Caritas; as well as the Migrantes Office of the Diocese of Rome and the Centro Astalli. Thank you all for your generous commitment!

And before leaving the square, I invite you to approach that monument there - where Cardinal Czerny is -: the boat with the migrants, and to dwell on the gaze of those people and to grasp in that gaze the hope that every migrant has today. to start living again. Go there, see that monument. We do not close the doors to their hope.

I express closeness and solidarity to those who have been affected by the eruption of the volcano on La Palma Island, in the Canaries. I am thinking especially of those who have been forced to leave their homes. For these people so tried and for the rescuers we pray to Our Lady, venerated on that Island as Nuestra Señora de las Nieves.

Today, in Bologna, Don Giovanni Fornasini, priest and martyr, will be beatified. Zealous parish priest in charity, he did not abandon the flock in the tragic period of the Second World War, but defended it until the shedding of blood. May your heroic testimony help us to face the trials of life with strength. A round of applause to the new Blessed!

And I greet all of you, Romans and pilgrims from various countries. In particular, I greet the lay Movement of the Opera Don Orione and the representation of parents and associated children in the fight against cancer.

I wish you all a good Sunday. And please, please don't forget to pray for me. Have a good lunch and goodbye!