Saint September 28 : St. Wenceslaus a Duke and Martyr Who had Taken a Vow of Virginity 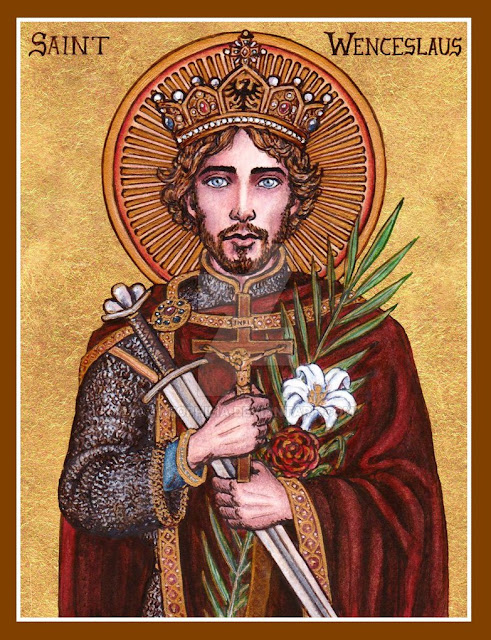 (Also Vaclav, Vaceslav.) Duke, martyr, and patron of Bohemia, born probably 903; died at Alt-Bunzlau, 28 September, 935. His parents were Duke Wratislaw, a Christian, and Dragomir, a heathen. He received a good Christian education from his grandmother (St. Ludmilla) and at Budweis. After the death of Wratislaw, Dragomir, acting as regent, opposed Christianity, and Wenceslaus, being urged by the people, took the reins of government. He placed his duchy under the protection of Germany, introduced German priests, and favoured the Latin rite instead of the old Slavic, which had gone into disuse in many places for want of priests. Wenceslaus had taken the vow of virginity and was known for his virtues. The Emperor Otto I conferred on him the regal dignity and title. For religious and national motives, and at the instigation of Dragomir, Wenceslaus was murdered by his brother Boleslaw. The body, hacked to pieces, was buried at the place of murder, but three years later Boleslaw, having repented of his deed, ordered its translation to the Church of St. Vitus in Prague. The gathering of his relics is noted in the calendars on 27 June, their translation on 4 March; his feast is celebrated on 28 September. Text from The Catholic Encyclopedia
PRAYER: O God, who taught the Martyr St Wenceslaus to place the heavenly Kingdom before an earthly one, grant through his prayers that, denying ourselves, we may hold fast to you with all our heart. Through our Lord Jesus Christ, your Son, who lives and reigns with you in the unity of the Holy Spirit, one God, for ever and ever. Amen.