Saint September 4 : St. Rosalia who Lived in a Cave and Ended the Plague 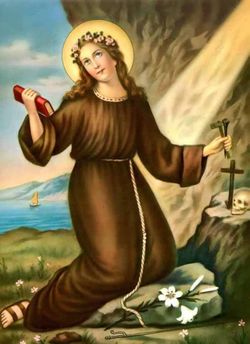 Saint Rosalia was born in about 1130, when Sicily was ruled by the Normans. The king was Roger the Second.
.
Before Roger conquered Sicily, it had had been ruled by Arabs, and they developed and changed the place a lot. They built palaces and set up courts that were much more organised and showy than anything the Europeans had ever seen.

So, although the Normans were from France, and were Christians, they started to live like Arabs. They wore Arab clothes, ate Arab food, and ran their palaces like Arab palaces, with harems. The only thing about them that was not Arab was their religion, but they even modified their version of Catholicism to be more in line with Arabic traditions, by making the women cover their heads in public for example.

Rosalia grew up in Roger’s court, in the Palazzo Dei Normanni, and she must have been kept in the harem with all the other women. She was a daughter of Duke Sinibaldo of Quisquina delle Rose, who was a nephew of the king. Since she was living in the royal palace, that meant the king was in charge of her.
One day King Roger went out hunting on Monte Pellegrino. He was with a group of men from the court, and among them was Count Baldwin, who was a guest at the palace. Roger was attacked by a wild lion and Prince Baldwin very bravely fought it off, and saved the king’s life.

The king offered him anything he wanted as a reward, and Baldwin asked to have Rosalia as his wife. Rosalia had long blonde hair and blue eyes and was about twelve or thirteen years old.

Baldwin, like many other men at the time, was overwhelmed by her beauty. Rosalia was clearly not overwhelmed by his. The day after his proposal, she appeared in court with all her long blonde hair chopped off, and said she wanted to become a nun.

The fact she was still showing her hair means she hadn’t even had her first period, because that was the usual turning point at which a girl become a woman and must cover her head.

First, Rosalia took refuge in the Convent of the Basilian nuns in Palermo. That’s a church now, by the way, and it’s absolutely beautiful. But even there she could get no peace. She was visited constantly by her parents and by Count Baldwin, trying to convince her to marry him. In the end she was so desperate that she just ran away completely and lived in a cave.

Nobody knew where she was at first, and they were all desperate. She lived for twelve years all alone on Mount Quisquina and then moved to Mount Pellegrino, and lived in a cave on the mountain till she died, aged about thirty. She lived her whole life praying and devoting herself to God.

The cult of Santa Rosalia is connected to a particular event that occurred in Palermo during an episode of plague, three centuries after she died all alone on the mountain top, sheltering in her cave.

On the seventh of May 1624 a trading vessel arrived from Tunis and docked in the port of the city. Previously the vessel had called at Trapani, where it had been impounded because the crew was suspected of spreading the plague. The alarm was quickly raised, but the Viceroy of Palermo, one Emanuele Filiberto (who was absolutely tiny, by the way), was talked into letting the ship unload. The ship’s captain, one Mahomet Cavalà, together with the harbourmaster, headed off to the Royal Palace to give the pint-size Viceroy numerous gifts – camels, lions, jewels and tanned hides – sent to him by the King of Tunis. Silly, greedy little Emanuele was one of the first to die of the plague.

As feared, plague started spreading through the city. It lasted the whole month of May and to the middle of June, with people dying in their thousands.

The authorities blocked off the ports and the streets, banning anyone from leaving the city. Thus the people in Palermo at that time knew they may be living under a death sentence, in mass quarantine – the only means of protecting the rest of Sicily and Europe.

The Italians invented quarantine as a policy and the word is derived from quarantena, which means “about forty”. This is one of those numbers that appears again and again in the Bible because in the past it was used to mean “quite a long time” rather than exactly forty.


The citizens of Palermo prayed day and night to their four patron saints: Santa Cristina, Santa Ninfa, Santa Olivia and Santa Agata. They organised religious processions. The churches were packed with masses going on around the clock, begging God and Jesus and the Virgin Mary for help. Yet the plague killed more and more people.

According to contemporary records, Vincenzo Bonelli, a soap-maker residing in Via dei Pannieri who had lost his wife to the plague, went up on Monte Pellegrino for a walk and got lost in a storm. Some versions of the story say he liked hunting, and was hoping to catch some wild animal to eat.
He experienced a vision: Saint Rosalia appeared to him and guided him to the cave on top of the mountain, where he found some bones. These were her bones, she told him, and if they were taken to Palermo and given a Christian burial, the plague would stop.

Vincenzo went straight to the Archbishop of Palermo, Cardinal Giannettino Doria, taking the bones of Saint Rosalia with him. At first the cardinal sent this crazy soap-maker packing.

Vincenzo refused to take no for an answer, pestering the cardinal again and again as the plague raged on through the city. Eventually he agreed to organise a procession and conduct a funeral. The bones were carried in solemn procession through the streets of the city, and finally given full funeral rites.

As Rosalia had promised, the plague immediately stopped spreading. She was instated as the new patron saint of Palermo and the four old saints were fired. They still stand, looking ashamed and redundant, around the four corners of the spectacular Quattro Canti crossroads in Palermo.

Meanwhile Rosalia is honoured in statues all over Palermo.
Edited from SicilianGodmother.com