Wow 4500 People Participate in Pro-Life March for Life in Berlin, Germany with many Youth, Families and Church Representatives - VIDEO 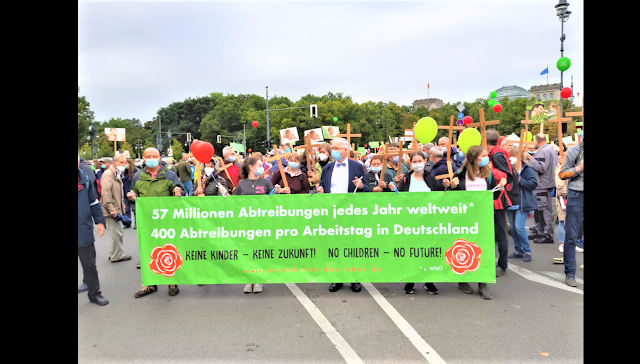 4,500 people of all ages took part in the March for Life in front of the Brandenburg Gate,  in Berlin, Germany. The Pro-Life march was attended by youth groups, families, senior citizens, communities, bus groups, guests from home and abroad. Personalities from church, politics and society have been there for years, including Bishops Voderholzer from Regensburg and Ipolt from Görlitz, the chairman of the Evangelical Alliance, Ekkehart Vetter, representatives of the Orthodox churches and Johannes Singhammer, former Vice President of the Bundestag. Many other personalities supported the march with greetings, including Christine Lieberknecht, former Prime Minister of the Free State of Thuringia.

"Children were prevented from continuing to live." That was the term used to describe abortion in the GDR. Helmut Matthies, journalist and chairman of idea eV, spoke about the consequences as a prelude on the podium in front of the demonstration through the city.
The Youth for Life in Germany is growing steadily, with pro-life tours and congresses, among other things, a young student wore a self-composed poem. A flag was presented that has been circulating with the pink and blue image of small feet, a symbol of the right to life movement for a long time.
The event was musically accompanied by the band Gnadensohn and the blind singer Bernarda Brunovic. After speakers on the podium the two-hour, peaceful demonstration took place through downtown Berlin.
The event ended with a call to the next March for Life on September 17, 2022.