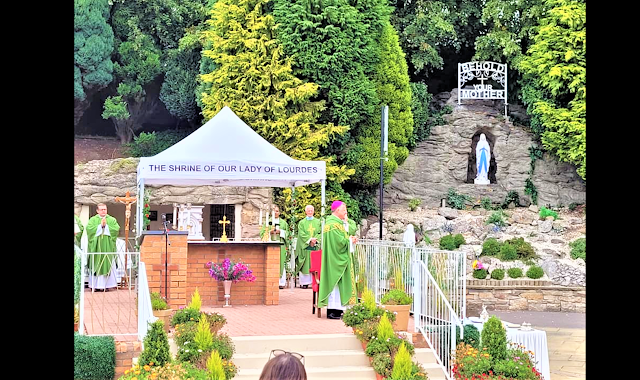 Vandals attacked Lanarkshire church and Carfin Grotto church in Scotland. The fire had caused massive damage to cabling and candle holders while the roof appeared to also have been burned. Memorial plaques for loved ones were also damaged. A spokesman for Sancta Familia Media told the Record: "We know it was deliberate because items were added in a pile and set on fire within the Lourdes memorial cave Speaking to Lanarkshire Live, parish priest Fr Krzysztof Garwoliński said: “Looking at the CCTV the person made sure there was no-one else around and them smashed the pots.
“It is very disappointing. I have informed the police and also the Diocese of Motherwell."
Fr Krzysztof also revealed the generosity of locals since the incident took place. He added: “One local business in Wishaw has already came forward and donated new pots. “A lot of people have got in touch to see if they could help. They take a lot of pride in the church and that’s wonderful to see that community spirit.”
A Police Scotland spokesman said: “The incident at St Patrick’s Church is currently being investigated. Over the weekend, there were also reports of vandalism at Carfin Grotto with yobs starting a fire which destroyed a number of candle stands.
Writing on Facebook, the Grotto stated: “Whilst there is financial damage and implications for repairs at a time when we are tight in cash, there is larger impact of intimidation and desecrating the prayers of the faithful and their loved ones.
“We are looking for any witnesses who may have seen a suspect person walking on Shieldmuir Street or nearby between 1am and 2am this morning.”
The site was opened in 1922 by Monsignor Thomas Canon Taylor, the Grotto welcomes over 70,000 pilgrims each year from across the globe and is open every day of the year.