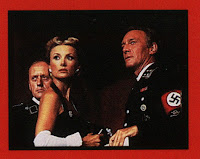 YOUTUBE ABOUT SHARE: The Scarlet and the Black is a 1983 made for TV movie starring Gregory Peck and Christopher Plummer. Based on J. P. Gallagher's book The Scarlet Pimpernel of the Vatican (published in 1967), this movie tells the story of Monsignor Hugh O'Flaherty, a real life Irish Catholic priest who saved thousands of Jews and Allied POWs in Nazi-occupied Rome. (not suitable for children)
The film epilogue states that Kappler was sentenced to life imprisonment, but was frequently visited in prison by O'Flaherty, eventually becoming a Catholic and being baptized at his hands in 1959.
Monsignor Hugh O'Flaherty was a real Irish priest and Vatican official, accredited with saving 6,500 Jews and Allied prisoners.
Herbert Kappler was sentenced to life imprisonment, and did convert to Catholicism after several years, partly under the influence of his war-time opponent Hugh O'Flaherty, who often visited Kappler in prison, discussing religion and literature with him. He was eventually transferred to a prison hospital on account of poor health. It was there that he escaped imprisonment by being smuggled out in a suitcase by his wife (Kappler weighed less than 105 pounds at the time). He escaped to West Germany, where he eventually died at age 70 in 1978. (Video from Gloria TV)
FOR AMAZING FREE MOVIES LIKE US ON FACEBOOK NOW
https://www.facebook.com/catholicnewsworld