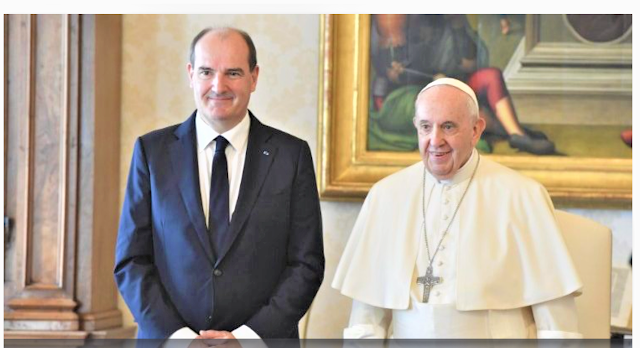 Vatican News reports that the French Prime Minister was received in audience by the Holy Father on the morning of Monday, October 18, 2021. This was before a trip intended to commemorate the centenary of diplomatic relations between France and the Holy See. (See VIDEO Below)
French Prime Minister Jean Castex met Pope Francis privately at the Vatican. This is the first time that the head of a French government has been received on an official visit by a Sovereign Pontiff, since 2009 when François Fillon was welcomed by Pope Benedict XVI. Jean Castex, accompanied by his wife but also the French Ministers of Foreign Affairs and the Interior arrived at the Apostolic Palace shortly before 10 a.m. With Pope Francis, they met for thirty-five minutes, before the head of the French government went to visit the Sistine Chapel and St. Peter's Basilica.
During their traditional exchange of gifts, the Holy Father offered Jean Castex a mosaic representing the "Winegrowers" with the inscription "May the fruit of the vine and of human labor be for us the drink of salvation" , as well as this year's Message for World Peace Day and the Document on Human Fraternity. The French Prime Minister for his part offered an edition of "Notre Dame de Paris" by Victor Hugo dating from 1836, as well as a football t-shirt signed by the Argentinian star Lionel Messi who signed up for the Paris-Saint club. -Germain this year. (Edited from Vatican News)

Rome Reports supplied their conversation:
-Thank you very much, so nice to meet you.
-And to hear you speak Spanish, I love it.
(The Prime Minister was born near France's border with Spain and speaks Spanish very well.)
The Prime Minister says they found several areas of agreement while discussing issues such as the situation in Lebanon, Iraq, and relations with Turkey. The Pope was also interested in France's role in the upcoming COP26 climate summit in Glasgow.
They also discussed how the Church will act in the wake of a recent report which revealed that members of the clergy in France have abused thousands of children since 1950.
Jean Castex asked that a study be carried out on how to reconcile the seal of confession with criminal law and the rights of victims.
-Bags of fruit for people who in need.
Pope Francis -What did he write? If you see him, thank him. (referring to the signed t-shirt)
In return, Pope Francis gave him a mosaic with a message.
-The work that goes into the grape, into the vine, helps us to walk towards eternal life.
The Pope then gave him the significant texts of his pontificate, such as the document on Human Fraternity which he signed along with one of the leaders of Sunni Islam.
-With the great imam of Al Azhar and Muslims...
-...We have spoken, thank you very much.
Their farewell reflected the friendly nature of the meeting, which the Pope ended by asking for prayers.
-Thank you for everything you do, and pray for me do not forget.
-Thank you very much.
-Pray for me, not against me.