Pope Francis Meets Prime Minister Narendra Modi of India in Historic Meeting at the Vatican and the Pope Receives an Invitation to Come! VIDEO 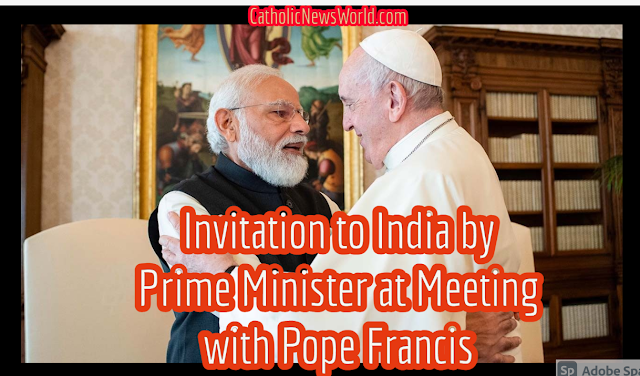 The Prime Minister of India, Narendra Modi visited Pope Francis in the Vatican, on Saturday, October 30, 2021.
According to Vatican News, his visit came during the G20 countries’ leaders meeting in Rome, ahead of the 26th United Nations Conference on Climate Change (COP26), in Glasgow, Scotland.
Pope Francis received in the Vatican Indian Prime Minister Narendra Modi, the first-ever meeting between the two leaders.  After holding talks with the Pope, Modi was received by Vatican Secretary
of State, Cardinal Pietro Parolin, and Vatican Secretary for Relations with States, Archbishop Paul Richard Gallagher.

“During a brief conversation, the cordial relations between the Holy See and India were discussed,” said a note by the Holy See Press office soon after the visit.
Modi’s Vatican visit lasted nearly an hour.  The Indian Prime Minister gifted the Pope a silver candlestick and a book on the commitment to the environment.  The Pope gave the Prime Minister a bronze plaque with the inscription “The desert will become a garden”, volumes of papal documents, his message for World Day of Peace and the document on Human Fraternity, signed on February 4 of 2019 in Abu Dhabi by the Pope and the Grand Imam of Al-Azhar.
About the Prime Minister
The prime minister leads the government that is headed by the Hindu nationalist Bharatiya Janata Party (BJP), formed in 1980.  In office since 2014 and reconfirmed after winning the 2019 elections within the "National Democratic Alliance" coalition, this is Modi’s first visit to the Vatican.
In fact, in September 2016, on the occasion of the canonization of Mother Teresa of Calcutta, the official Indian delegation led by the late former Minister of Foreign Affairs, Sushma Swaraj, was received by Pope Francis.

The last time that an Indian Prime Minister and a Pontiff met in the Vatican was more than 20 years ago.  Late Pope John Paul II, now a Saint, had received in audience late former Prime Minister, Atal Bihari Vajpayee, also a BJP member, on June 26, 2000.
In a context of growing anti-Christian violence in India, the Catholic Bishops’ Conference of India (CBCI) has always sought dialogue with the government for the good of the country.
With over 20 Million Catholics in the country, there are 10,701 parishes and 174 dioceses in India, organised into 29 provinces.
They also highlighted the effort of Christians in combatting the Covid-19 pandemic, ensuring their commitment in favour of the poorest and most vulnerable, which the Indian Prime Minister appreciated.
Other issues touched on during that meeting were the situation of religious minorities in a country where Christians make up just 2.3% of the population, and the release of Father Stan Swamy, the elderly Jesuit priest and activist for the rights of indigenous peoples, who was imprisoned for nine months on terrorism charges and died in July.
Modi's invitation to visit India
In his comments on Saturday’s meeting with Pope Francis, Prime Minister Modi said he has invited the Pontiff to India.  “Had a very warm meeting with Pope Francis. I had the opportunity to discuss a wide range of issues with him and also invited him to visit India,” Modi has reportedly written in a post on his Twitter handle after the meeting.
The request for a papal visit to India has already been advanced in 2017, in view of the Pope's apostolic journey to neighbouring Bangladesh and Myanmar in 2018, but it was not possible to follow up.
Saint Pope Paul VI was the first Pontiff to visit India in December 1964, on the occasion of the International Eucharistic Congress in Bombay, today Mumbai.  Saint Pope John Paul II made it twice to India: in February 1986 and in November 1999.
Edited from Vatican News with Files from https://catholicsindia.in/indian-catholics/

Had a very warm meeting with Pope Francis. I had the opportunity to discuss a wide range of issues with him and also invited him to visit India. @Pontifex pic.twitter.com/QP0If1uJAC