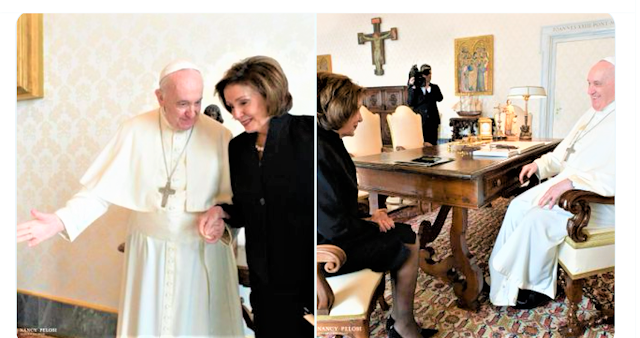 The Holy See released in their bulletin that Pope Francis met privately at the Vatican on October 9th with U.S. House Speaker Nancy Pelosi. Pelosi was in Rome to speak at the Pre-COP26 Parliamentary Meeting for the United Nations climate summit.

Pelosi, a Catholic, released a statement and 2 Twitter announcements about the private audience.

“His Holiness’ leadership is a source of joy and hope for Catholics and for all people, challenging each of us to be good stewards of God’s creation, to act on climate, to embrace the refugee, the immigrant and the poor and to recognize the dignity and divinity in everyone,” she said.

“His Holiness commands our attention to honor the Gospel of Matthew by serving ‘the least of these,’ lifting up those who have been left out or left behind, especially in the time of COVID. (Pelosi's statement)

Pelosi supports legalized abortion, thus her archbishop, Archbishop Salvatore J. Cordileone of San Francisco, asked “all Catholics and others of goodwill” to pray and fast for Pelosi’s “conversion.”

“A conversion of heart of the majority of our congressional representatives is needed on this issue, beginning with the leader of the House, Speaker Nancy Pelosi,” Archbishop Cordileone said in a statement Sept. 29.

Pelosi and her husband left Mass early at a church in Rome on Saturday evening because of a “security incident,” the church’s priest said. “You probably heard or saw the commotion. Unfortunately, I guess, there was a security incident and sadly Speaker Pelosi and her husband had to leave,” Fr. Steven Petroff, rector of St. Patrick’s Church in Rome, spoke of the incident in a video posted on social media.

Pro abortion American politician Nancy Pelosi 'had to leave' Mass in Rome today because of a 'commotion' and was unable to deliver a scheduled reading as a result. pic.twitter.com/0WYhRW08nw

Pope Francis gave the parliamentarians copies of the appeal he and other religious leaders signed at the Vatican Oct. 4 calling on world leaders and all people of good will to make a more serious commitment to protecting creation. It is common practice for the Pope, as head of State, to meet heads of state or representatives of a country and does not necessarily mean agreement with their political procedures.

It was a spiritual, personal and official honor to have an audience with His Holiness Pope Francis this morning. pic.twitter.com/nrWYyApnMQ

Anonymous said…
That he met with such a publicly manifest heretic & apostate, without publicly correcting her is scandalous; scandalous use in the proper sense of the term; a situation that will affirm innumerable people in the sin she promotes.
October 11, 2021 at 8:37 AM