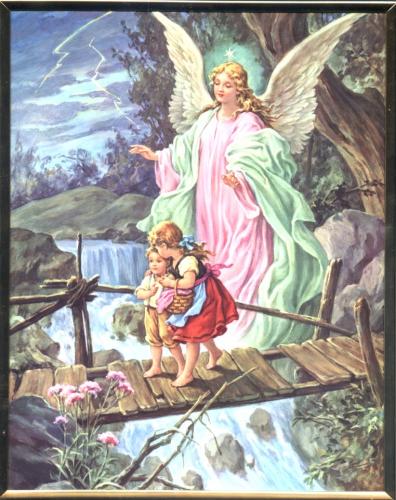 According to the Catechism of the Catholic Church (CCC 328) The existence of the spiritual, non-corporeal beings that Sacred Scripture usually calls "angels" is a truth of faith. The witness of Scripture is as clear as the unanimity of Tradition.
One may ask, who are they? (329)
St. Augustine explains: "'Angel' is the name of their office, not of their nature. If you seek the name of their nature, it is 'spirit'; if you seek the name of their office, it is 'angel': from what they are, 'spirit', from what they do, 'angel.'" 188 With their whole beings the angels are servants and messengers of God. Because they "always behold the face of my Father who is in heaven" they are the "mighty ones who do his word, hearkening to the voice of his word". 189
330 As purely spiritual creatures angels have intelligence and will: they are personal and immortal creatures, surpassing in perfection all visible creatures, as the splendour of their glory bears witness.
Christ “With All His Angels”
331 Christ is the centre of the angelic world. They are His angels: “When the Son of man comes in His glory, and all the angels with Him...” (Mt 25:31). They belong to Him because they were created through and for Him: “for in Him all things were created in heaven and on earth, visible and invisible, whether thrones or dominions or principalities or authorities—all things were created through Him and for Him” (Col 1:16).
They belong to Him still more because He has made them messengers of His saving plan: “Are they not all ministering spirits sent forth to serve, for the sake of those who are to obtain salvation?” (Heb 1:14).
 332 Angels have been present since creation and throughout the history of salvation, announcing this salvation from afar or near and serving the accomplishment of the divine plan: they closed the earthly paradise; protected Lot; saved Hagar and her child; stayed Abraham’s hand; communicated the law by their ministry; led the People of God; announced births and callings; and assisted the prophets, just to cite a few examples. Finally, the angel Gabriel announced the birth of the Precursor and that of Jesus Himself.
 333 From the Incarnation to the Ascension, the life of the Word Incarnate is surrounded by the adoration and service of angels. When God “brings the firstborn into the world, He says: ‘Let all God’s angels worship Him’” (Heb 1:6). Their song of praise at the birth of Christ has not ceased resounding in the Church’s praise: “Glory to God in the highest!” (Lk 2:14). They protect Jesus in His infancy, serve Him in the desert, strengthen Him in His agony in the garden, when He could have been saved by them from the hands of His enemies as Israel had been. Again, it is the angels who “evangelize” by proclaiming the Good News of Christ’s Incarnation and Resurrection. They will be present at Christ’s return, which they will announce, to serve at His judgment. (CCC)
For 2 October there is a proper Office in the Roman Breviary and a proper Mass in the Roman Missal, which contains all the choice extracts from Sacred Scripture bearing on the three-fold office of the angels, to praise God, to act as His messengers, and to watch over mortal men. "Let us praise the Lord whom the Angels praise, whom the Cherubim and Seraphim proclaim Holy, Holy, Holy" (second antiphon of Lauds). "Behold I will send my angel, who shall go before thee, and keep thee in thy journey, and bring thee into the place that I have prepared. Take notice of him, and hear his voice" (Exodus 23; capitulum ad Laudes). The Gospel of the Mass includes that pointed text from St. Matthew 18:10: "See that you despise not one of these little ones: for I say to you that their angels in heaven always see the face of my Father who is in heaven." The 2nd of October has been fixed for this feast in the Roman calendar. The Catholic Encyclopedia
The Catechism of the Catholic Church explains:
336 From its beginning until death, human life is surrounded by their watchful care and intercession.202 "Beside each believer stands an angel as protector and shepherd leading him to life."203 Already here on earth the Christian life shares by faith in the blessed company of angels and men united in God.
Prayer: Angel of God, my guardian dear, to whom God's love commits me here. Ever this day and night be at my side to lighten, to guard, to rule and to guide. Amen