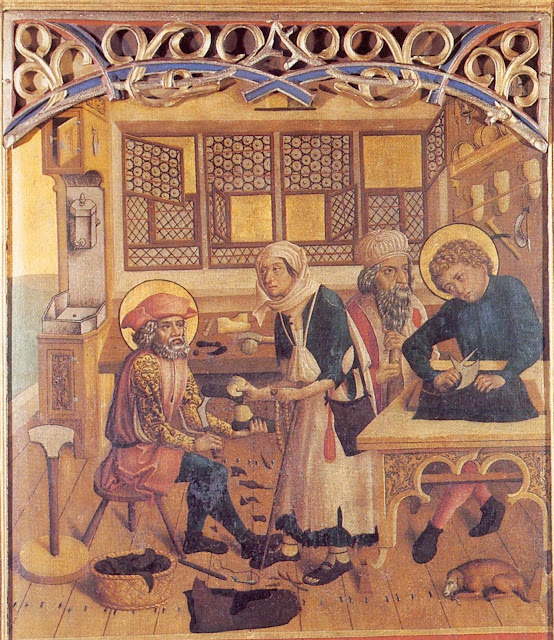 The French say Crispin and his brother Crispianus were born into a wealthy Roman family in the third century A.D. During the Diocletian persecution of Christians they escape to Noviodunum in France—later known as Soissons. Effectively disinherited and forced to fall back upon their own resources, Crispin and Crispianus become shoemakers. Though teaching the gospel was their life's work, they made shoes for the poor. Arrested and led before the Roman authorities, they were urged to recant. Both refused. Millstones were hung about their necks and they were thrown into the river Aisne. But both had the makings of sainthood in them even then and they refused to drown. At this point they were thrown into a cauldron of boiling lead, then a cauldron of pitch, then fat and oil but, they emerged unscathed. Legend suggests that they frolicked and sang until delivered by an angel. They were beheaded on November 8th, 288 A.D. on a plain near Soissons, which later became known as
PRAYER:
St Crispin and St Crispinian, may all shoemakers provide shoes for those who cannot afford them and keep their feet ever protected so that they may walk a good purpose. Pray for us, dear Saints, to obtain for us a lively faith, constancy in good works, and perseverance in the grace of God even unto death.
Amen. (Prayer Source: Prayers4reparation.wordpress.com)
The English version depicts Crispin and his brother as the sons of the queen of Logia, or Kent. To escape the persecution of Christians by Diocletian, the brothers dressed in commoners’ clothes and left their mother and the town of their birth—now known as Canterbury. Arriving in Faversham in the middle of the night, they knocked on a door from which a merry song emanated. This was the house of Robards, a master shoemaker. Impressed by their manners, Robards took them in. Straightaway they entered a seven year apprenticeship. So good was their work that Robards soon found himself appointed shoemaker to Maximinus, Diocletian's associate Emperor. Sent to Canterbury with shoes for Ursula, the Emperor’s daughter, Crispin was struck by her beauty and fell in love with her. After all the trials and tribulations that love and class can inflict upon them, Ursula and Crispin secretly married. When Maximinus learned of Crispin's high birth, he became reconciled to their marriage and blessed their son saying: "A shoemaker's son is a prince born." The marriage was confirmed October the 25th and celebrated with feasting and drinking. That day has ever since been the shoemakers' holiday. Shared from thehcc.org/crispin.htm - Image SHARE Google Images