Saint October 25 : St. Gaudentius of Brescia, Italy : a Bishop who said "Let the word of God, and the sign of Jesus Christ (the cross) be in your hearts, in your mouths, on your countenance..." 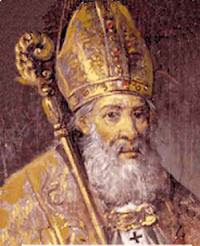 BISHOP
Feast Day: October 25
Born: Brescia, Italy
Died: 410
HE seems to have been educated under St. Philastrius, bishop of Brescia, whom he styles his father. His reputation ran very high when he travelled to Jerusalem, partly to shun applause and honours, and partly hoping by his absence to be at last forgotten at home. In this, however, he was mistaken. In a monastery at Cæsarea, in Cappadocia, he met with the sisters and nieces of St. Basil, who, as a rich present, bestowed on him certain relics of the forty martyrs and some other saints, knowing that he would honour those sacred pledges as they had honoured them.
During his absence St. Philastrius died, and the clergy and people of Brescia, who had been accustomed to receive from him solid instructions, and in his person to see at their head a perfect model of Christian virtue, pitched upon him for their bishop, and fearing obstacles from his humility, bound themselves by oath to receive no other for their pastor.
The bishops of the province met, and with St. Ambrose, their metropolitan, confirmed the election. Letters were despatched to St. Gaudentius, who was then in Cappadocia, to press his speedy return; but he only yielded to the threat of an excommunication if he refused to obey. He was ordained by St. Ambrose with other bishops of the province, about the year 387; the sermon which he preached on that occasion, expresses the most profound sentiments of humility with which he was penetrated. 2  1  The church of Brescia soon found how great a treasure it possessed in so holy a pastor. He never ceased to break to them the bread of life, and to feed their souls with the important truths of salvation. A certain virtuous nobleman, named Benevolus, who had been disgraced by the Empress Justina, because he refused to draw up an edict in favour of the Arians, had retired to Brescia, his own country, and was the greatest ornament of that church. This worthy nobleman being hindered by a severe fit of sickness from attending some of the sermons of St. Gaudentius, requested of him that he would commit them to writing for his use.
3 By this means we have seventeen of his sermons.
4 In the second which he made for the Neophites at their coming out of the font, he explaineth to them the mysteries which he could not expound in presence of the catechumens, especially the blessed eucharist, of which he says: “The Creator and Lord of nature who bringeth the bread out of the ground, maketh also of bread his own body; because he hath promised, and is able to perform it: and he who made wine of water, converteth wine into his own blood.”
5 The saint built a new church at Brescia, to the dedication of which he invited many bishops, and in their presence made the seventeenth sermon of those which are extant. In it he says: that he had deposited in this church certain relics of the forty martyrs, of St. John Baptist, St. Andrew, St. Thomas, St. Luke; some of the blood of SS. Gervasius, Protasius, and Nazarius, moulded into a paste, and of the ashes of SS. Sisinnius and Alexander. He affirms that a portion of a martyr’s relics is in virtue and efficacy the same as the whole. “Therefore,” says he, “that we may be succoured by the patronage of so many saints, let us run and supplicate with an entire confidence, and earnest desire, that by their interceding we may deserve to obtain all things we ask, magnifying Christ our Lord, the giver of so great grace.” 6 Besides these seventeen sermons of this father we have three others. The twentieth is a panegyric on St. Philastrius,
7 wherein our saint mentions that he had made a like panegyric on his holy predecessor every year on his anniversary festival for fourteen years. The saint exhorts Christians to banish all dissolute feastings accompanied with dancing and music, saying: “Those are wretched houses which resemble theatres. Let the houses of Christians be free from every thing of the train of the devil; let humility and hospitality be practised therein; let them be always sanctified by psalms and spiritual songs; let the word of God, and the sign of Jesus Christ (the cross) be in your hearts, in your mouths, on your countenance, at table, in the bath, when you go out and when you come in, in joy and in sorrow.” 8 In 405, St. Gaudentius was deputed with some others by the Roman council and by the Emperor Honorius into the East to defend the cause of St. Chrysostom before Archadius: for which commission St. Chrysostom sent him a letter of thanks which is extant, though the deputies were ill received, and imprisoned for some time in Thrace, and afterwards put on board a rotten vessel. St. Gaudentius seems to have died about the year 420; Labbe says in 427. Rufinus styles him “the glory of the doctors of the age wherein he lives.” He is honoured on this day in the Roman Martyrology. See his works printed in the Library of the Fathers, and more correctly at Padua, in 1720, 4to; also Ceillier, t. 10, p. 517; Cave, Hist. Littér. t. 1, p. 282.  2