Saint October 3 : St. Gerard of Brogne, in Belgium, who Restored the Order of St. Benedict 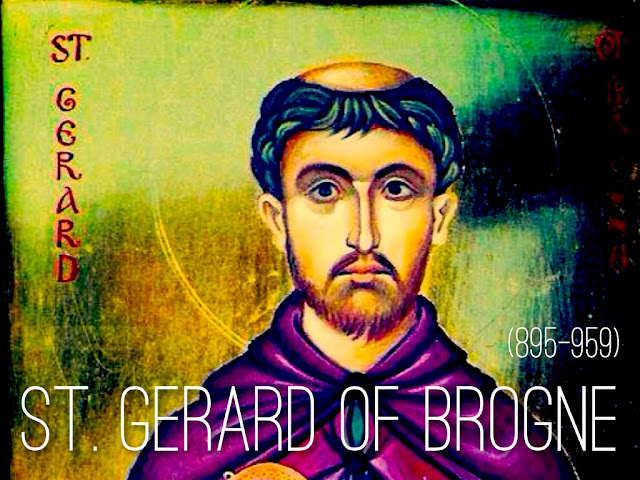 Born at Staves in the county of Namur, towards the end of the ninth century; died at Brogne or St-Gérard, 3 Oct. 959. The son of Stance, of the family of dukes of Lower Austrasia, and of Plectrude, sister of Stephen, Bishop of Liège, the young Gérard, like most omen of his rank, followed at first the career of arms. His piety, however, was admirable amid the distractions of camp. He transformed into a large church a modest chapel situated on the estate of Brogne which belonged to his family. About 917, the Count of Namur charged him with a mission to Robert, younger brother of Eudes, King of France. He permitted his followers to reside at Paris, but himself went to live at the Abbey of St-Denis, where he was so struck by the deifying lives of the monks that, at the conclusion of his embassy, with the consent of the Count of Namur and Bishop Stephen, his maternal uncle, he returned to St-Denis, took the religious habit, and after eleven years was ordained priest. He then requested to be allowed to return to Brogne, where he replaced the lax clerics with monks animated by a true religious spirit. Thereupon he himself retired to a cell near the monastery for more austere mortification. From this retreat he was summoned by the Archbishop of Cambrai who confided to him the direction of the community of St-Ghislain in Hainault. Here also he established monks instead of the canons, whose conduct had ceased to be exemplary, and he enforced the strictest monastic discipline. Gradually he became superior of eighteen other abbeys situated in the region between the Meuse, the Somme, and the sea, and through his efforts the Order of St. Benedict was soon completely restored throughout this region. Weighed down by age and infirmities, he placed vicars or abbots in his stead, in the various abbeys with which he was charged, and retired to that of Brogne. He still had courage to take a journey to Rome in order to obtain a Bull confirming the privileges of that abbey. On his return he paid a final visit to all the communities which he had reorganized, and then awaited death at Brogne. His body is still preserved at Brogne, now commonly calledSt-Gérard.
SOURCE The Catholic Encyclopedia