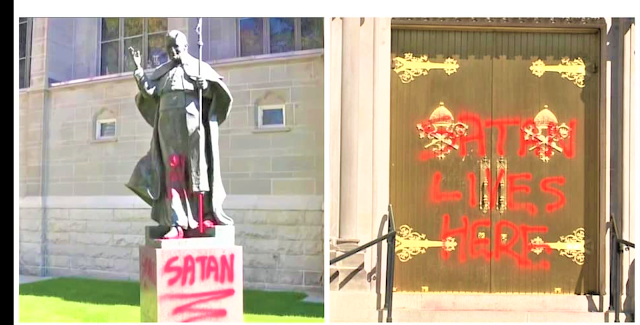 The Cathedral Basilica of the Immaculate Conception in downtown Denver was vandalized by Satanic messages of hate. “We had been tagged by what we think is the worst act (of) vandalism that we’ve seen in years, but not the first in years,” Father Samuel Morehead said. “I would say this is the worst because of the vitriol, the anger that’s up on the walls.” Messages of hate — including the terms “child rapists,” a homophobic slur, and references to Satan — were spray-painted on the church’s walls and doors sometime before the beginning of its 8:30 a.m. mass. Since his start at the church in July, Morehead says the church has been vandalized at least three times. In this case, a witness saw it happen, which may help Denver Police find out who did it. Since February 2020, the Archdiocese of Denver says it’s been aware of at least 25 locations in northern Colorado that have been the target of vandalism, destruction or theft. More than 10 of those incidents have happened in the past six months. (Edited from Denver Post)