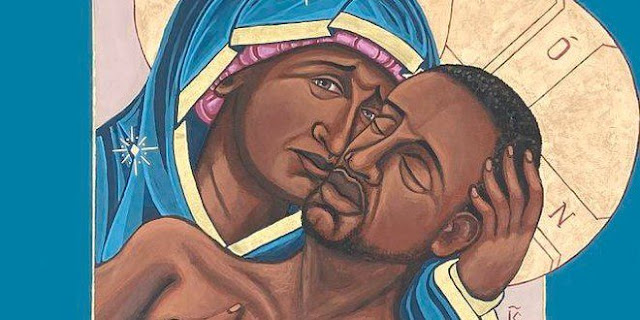 The Catholic University of America's law school has replaced an icon of Mary holding Jesus. Some students complained the image of Christ resembled George Floyd, a Black man killed by a white police officer in Minneapolis in May 2020. The icon was placed as the entrance of the Mary Mirror of Justice Chapel at the university’s Columbus School of Law since February. Before Thanksgiving some groups began petitions to have it removed. On November 23rd, 2021 it was stolen.

Dear Members of the University Community,

I am sure that most of you have seen some media coverage relating to the image, hung in our Law School, that depicted Mary holding the body of the dead Christ. Many see the male figure as George Floyd, but our Law School has always seen the figure as Jesus.The painting was put in place last February in a ceremony outside the law school’s Mary Mirror of Justice chapel. The press began covering it this week, leading to criticism on social media and a substantial number of emails and phone calls. Some critics called the image blasphemous because they saw it as deifying or canonizing George Floyd. Some comments that we received were thoughtful and reasonable. Some were offensive and racist. Much of the criticism came from people unconnected to the University.As the controversy developed, we responded to the press and to some of the reasonable critics. I am including our statement to the media below. It has been the University’s policy, throughout my time as President, not to cancel speakers or prevent speech by members of the community. Last Spring we applied this policy to an appearance by Abby Johnson. Consistent with that policy, we declined suggestions in this case that we take the image down. Last night, however, the picture was stolen from its place outside the chapel. Our Department of Public Safety discovered the theft shortly after it occurred and continues to investigate.We have replaced the picture with an identical, though smaller, copy that hung in our Campus Ministry office. Our “no cancellation” policy does not apply only to the administration. We hope to continue to build on campus a culture that engages in thoughtful dialogue and debate, not the sort of bully tactics epitomized by this theft.Sincerely,John Garvey, President

The icon “Mama” is a pieta depicting Mary and her Son, Jesus Christ. The letters in the halo are Ὁ ὬΝ, which is shorthand in Greek for “I Am.” The letters are used in icons only in connection with Jesus Christ, the Son of God.There are those who would like to see George Floyd as the male figure in the icon. That is not how we read it. The image represents to our community a good-faith attempt to include religious imagery on campus that reflects the universality of the Catholic Church.The Catholic University of America is a faithfully Catholic university in the nation’s capital city. We are proud of our Catholic identity, and we welcome and are hospitable to all who seek a Catholic University education.

JOHNTIESO said…
Interesting twist of truth here. I was removed from my faculty position in 2020 for exercising my freedom of speech on Twitter — a private account with no reference to Catholic University. The comment was political about then candidate Kamala Harris, yet I was immediately called a racist by the Director of Communications at CUA. Days later, I was removed from teaching.

So much for Catholicism and free thought under the First Amendment.
John Tieso
November 30, 2021 at 3:23 PM