Dedication of the Basilicas of Sts. Peter & Paul
The Vatican Church, dedicated in honour of St. Peter, is the second patriarchal church at Rome, and in it reposes one half of the precious remains of the bodies of SS. Peter and Paul. The tombs of the great conquerors and lords of the world have been long since destroyed and forgotten; but those of the martyrs are glorious by the veneration 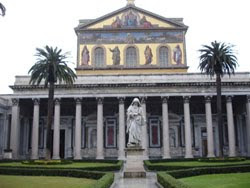 which the faithful pay to their memory.
The body of St. Peter is said to have been buried immediately after his martyrdom, upon this spot, on the Vatican hill, which was then without the walls and near the suburb inhabited by the Jews. The remains of this apostle were removed hence into the cemetery of Calixtus, but brought back to the Vatican.
Those of St. Paul were deposited on the Ostian Way, where his church now stands. The tombs of the two princes of the apostles, from the beginning, were visited by Christians with extraordinary devotion above those of other martyrs. Caius, the learned and eloquent priest of Rome, in 210, in his dialogue with Proclus the Montanist, speaks thus of them: "I can show you the trophies of the apostles. For, whether you go to the Vatican hill, or to the Ostian road, you will meet with the monuments of them who by their preaching and miracles founded this church."
The Christians, even in the times of persecution, adorned the tombs of the martyrs and the oratories which they erected over them, where they frequently prayed. Constantine the Great, after founding the Lateran Church, built seven other churches at Rome and many more in other parts of Italy. The first of these were the churches of St. Peter on the Vatican hill (where a temple of Apollo and another of Idaea, mother of the gods, before stood) in honour of the place where the prince of the apostles had suffered martyrdom and was buried and that of St. Paul, at his tomb on the Ostian road. The yearly revenues which Constantine granted to all these churches, amounted to seventeen thousand seven hundred and seventy golden pence, which is above thirteen thousand pounds sterling, counting the prices, gold for gold; but, as the value of gold and silver was then much higher than at present, the sum in our money at this day would be much greater. These churches were built by Constantine in so stately and magnificent a manner as to vie with the finest structures in the empire, as appears from the description which Eusebius gives us of the Church of Tyre; for we find that the rest were erected upon the same model, which was consequently of great antiquity. St. Peter's Church on the Vatican, being fallen to decay, it was begun to be rebuilt under Julius II in 1506, and was dedicated by Urban VIII in 1626, on this day; the same on which the dedication of the old church was celebrated The precious remains of many popes, martyrs, and other saints, are deposited partly under the altars of this vast and beautiful church, and partly in a spacious subterraneous church under the other. But the richest treasure of this venerable place consists in the relics of SS. Peter and Paul, which lie in a sumptuous vault beyond the middle of the church, towards the upper end, under a magnificent altar at which only the pope says mass, unless he commissions another to officiate there. This sacred vault is called The confession of St. Peter, or The threshold of the Apostles (