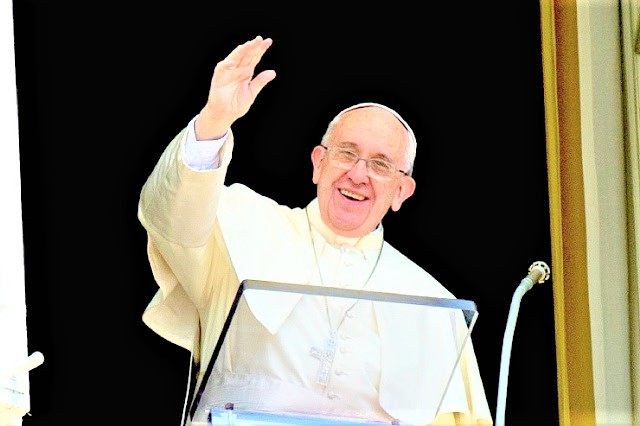 The scene described by the Gospel of today's Liturgy takes place inside the Temple of Jerusalem. Jesus looks, looks at what happens in this place, the most sacred of all, and sees how the scribes love to walk to be noticed, greeted, revered, and to have places of honor. And Jesus adds that "they devour the houses of widows and pray for a long time to be seen" ( Mk12.40).

At the same time, his eyes catch a glimpse of another scene: a poor widow, just one of those exploited by the powerful, throws into the treasury of the Temple "everything she had to live" (v. 44). Thus says the Gospel, he throws everything he had to live into the treasury. The Gospel presents us with this striking contrast: the rich, who give what is superfluous to be seen, and a poor woman who, without appearing, offers all the little she has. Two symbols of human attitudes.

Jesus looks at the two scenes. And it is precisely this verb - "to look" - that sums up his teaching: from those who live the faith with duplicity, like those scribes, "we must guard ourselves" so as not to become like them; while the widow we must "look" to take her as a model. Let us dwell on this: beware of hypocrites and look at the poor widow .

And to heal from this disease, Jesus invites us to look at the poor widow . The Lord denounces the exploitation of this woman who, in order to make the offer, must return home deprived even of the little she has to live. How important it is to free the sacred from its bonds with money! Jesus had already said it, in another place: one cannot serve two masters. Either you serve God - and we think he says "either the devil", no - either God or the money. He is a master, and Jesus says we shouldn't serve him. But, at the same time, Jesus praises the fact that this widow throws everything she has into the treasury. She has nothing left, but she finds her everything in God. He is not afraid of losing the little he has, because he trusts in the much of God, and this much of God multiplies the joy of those who give. This also makes us think of that other widow, that of the prophet Elijah, who was about to make a cake with the last flour she had and the last oil; Elijah tells her: "Give me to eat" and she gives; and the flour will never decrease, a miracle (cf. 1 Kings17.9-16). The Lord always, in the face of people's generosity, goes further, he is more generous. But it is He, not our greed. Here then is that Jesus proposes her as a teacher of faith, this lady: she does not go to the Temple to clear her conscience, she does not pray to be seen, she does not flaunt her faith, but gives with her heart, with generosity and gratuitousness. Her coins have a more beautiful sound than the great offers of the rich, because they express a life dedicated to God with sincerity, a faith that does not live on appearances but on unconditional trust. We learn from her: a faith without external trappings, but sincere inwardly; a faith made of humble love for God and for the brothers.

And now we turn to the Virgin Mary, who with a humble and transparent heart made her whole life a gift for God and for his people.

I am following with concern the news coming from the Horn of Africa region, in particular from Ethiopia, shaken by a conflict that has been going on for more than a year and which has caused numerous victims and a serious humanitarian crisis. I invite everyone to pray for those peoples who are so severely tried, and I renew my appeal that fraternal harmony and the peaceful way of dialogue prevail.

And I also assure my prayers for the victims of the fire following a fuel explosion on the outskirts of Freetown, the capital of Sierra Leone.

Yesterday in Manresa, Spain, three martyrs of the faith were proclaimed blessed, belonging to the Order of the Capuchin Friars Minor: Benet de Santa Coloma de Gramenet, Josep Oriol de Barcelona and Domènech de Sant Pere de Riudebitlles. They were killed in the period of religious persecution of the last century in Spain, proving to be meek and courageous witnesses of Christ. May their example help Christians today to remain faithful to their vocation, even in times of trial. A round of applause to these new blesseds!

I greet all of you, dear faithful of Rome and pilgrims from various countries, especially those who have come from the United States of America and Portugal. I greet the groups of faithful from Prato and Foligno; and the boys of the Bresso Profession of Faith.

I wish everyone a happy Sunday. And please don't forget to pray for me. Have a good lunch and goodbye!