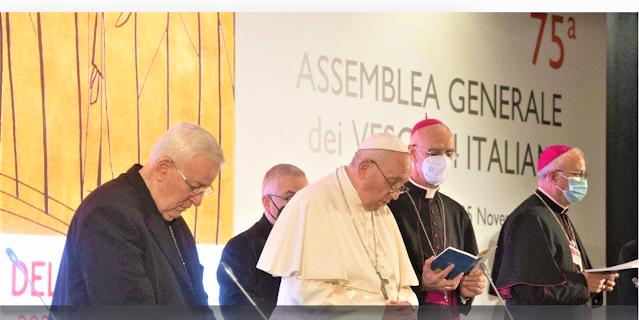 Pope Francis opened the 75th Extraordinary General Assembly of the Italian Bishops’ Conference (CEI) on Monday. The meeting is taking place in Rome from 22 to 25 November.
The Pope arrived at the Ergife Hotel in Rome at 4:00 pm and spoke privately with the Italian bishops. The Holy See Press Office reported that as he initiated the meeting, Pope Francis greeted the prelates with a card containing an image of the Good Shepherd and the text of a reflection entitled "The Beatitudes of the Bishop" (See below). He returned to the Vatican at about 6:00 pm.

In his introductory address, CEI president Cardinal Gualtiero Bassetti quoted St. Paul VI, that the Italian Bishops will use the meeting as an opportunity to rediscover and meditate on the word of Christ and revive the faith, but also to reflect on the synodal path which CEI launched during its General Assembly in May this year, involving all Catholic communities and in line with the 2021-2023 Synodal process.
During the four-day meeting Italian Bishops will listen to a  presentation by Cardinal Mario Grech, General Secretary of the Synod of Bishops, on the ongoing synodal process. Cardinal Grech's presentation will be followed by a floor debate and a speech on the topic by Bishop Erio Castellucci, the vice-president of the CEI.
In addition, the Bishops will discuss the implementation of the recent reform of Book VI of the Code of Canon Law, which introduces new penal sanctions in the Church for several offences including pedophilia; and the elaboration of new CEI Guidelines and norms for the seminaries in light of the Vatican document "Ratio fundamentalis institutionis sacerdotalis", on the gift of the priestly vocation.
The close of the Assembly, will be on November 25.
Pope Francis shared these 8 "Beatitudes for Bishops" with the bishops of Italy.
Blessed is the bishop who makes poverty and sharing his lifestyle, because with his witness he builds the Kingdom of Heaven.
Blessed is the bishop who is not afraid to wet his face with tears, so that in them may be reflected the sorrow of the people, and the work of priests, and who finds God' consolation in the embrace with those who suffer.
Blessed is the bishop who considers his ministry a service and not a power, who makes meekness his strength, gives everyone a right to a place in his heart, so as to give the promised land to the weak.
Blessed is the bishop who does not shut himself up in government buildings, who does not become a bureaucrat more attentive to statistics than to faces, to proceduries than to stories, who seeks to fight alongside man for God's dream of justice because the Lord, encountered in the silence of daily prayer, will nourish him.
Blessed is the bishop who has a heart for the misery of the world. Who is not afraid to dirty his hands with the mud of the human soul in order to find the gold of God there, who is not scandalized by the sin and fragility of others because he knows his own misery, because the look of the Risen Crucified One will be the seal of infinite forgiveness.
Blessed is the bishop stays away from the duplicity of the heart, who avoids every ambigious dynamic, who dreams of the good even in the midst of evil, because he will be able to rejoice in the face of God, finding His reflection in every puddle in the city of people.
Blessed is the bishop who works for peace, who walks along the path of reconciliation, who plants the seed of communion in the hearts of priests, who accompanies a divided society along the path of reconciliation, who takes every man and woman of goodwill by the hand to build fraternity: God will recognize him as his son.
Blessed is the bishop who is not afraid to go against the current for the Gospel, and hardens his face like Jesus going to Jerusalem, without letting himself be stopped by misunderstandings and obstacles because he knows that the Kingdom of God moves forth against the world.
Edited from Vatican News