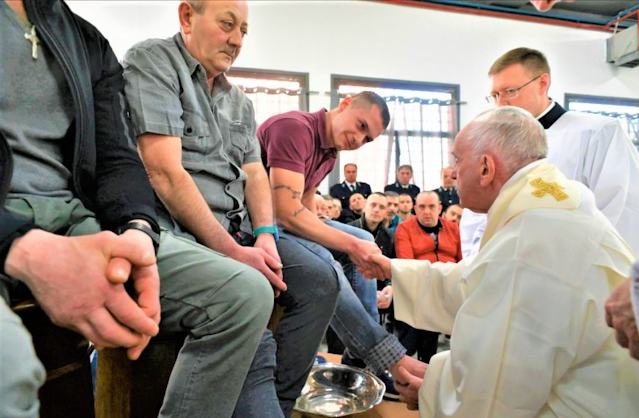 Pope Francis wrote a letter to Michael O’Loughlin, a journalist and host of a podcast on the work of some representatives of the Church during the HIV/AIDS epidemic in the 1980s and 1990s. In the letter, Vatican News explains that the Holy Father praises the “mercy” shown by these people, including many who put their professions and reputations at risk.
Pope Francis has expressed gratitude to the many priests, nuns, and laypeople who have helped HIV and AIDS patients, even at the cost of their lives, in the 1980s and 1990s when the epidemic of the then-unknown virus had an almost 100% mortality rate.
The Pope mentioned the service of priests, nuns, and laypeople who helped HIV/AIDS patients in the letter. Michael O'Loughlin, is a correspondent for the U.S. magazine “America.” He recently authored a book entitled "Hidden Mercy: AIDS, Catholics and the Untold Stories of Compassion in the Face of Fear."
In the brief letter, the Pope wrote: “Thank you for illuminating the lives and witnessing of the many priests, women religious and laypeople who have chosen to accompany, support and help their brothers and sisters suffering from HIV and AIDS at great risk to their profession and reputation."
"Instead of indifference, alienation and even condemnation," the Pope continues, "these people have allowed themselves to be moved by the Father's mercy and have allowed it to become the work of their own lives; a mercy that is discreet, silent and hidden, but still capable of sustaining and restoring life and history to each of us.
Vatican News explains there was initial stigma towards those with the disease. It was initially termed the Gay Related Immunodeficienty Syndrome, which resulted in homosexuals being fired from jobs and removed from parishes, since there were many members of the ecclesiastical hierarchy who referred to the virus as "a punishment from God for immoral sexual behavior.”
It was only in 1982 that the disease was named Acquired Immuno Deficiency Syndrome (AIDS).
During this period, Mother Teresa intervened. At Christmas in 1985, the Albanian nun, founder of the Missionaries of Charity – approached the then archbishop of New York, Cardinal Terence Cooke, with the same spirit with which for years she had served the lepers in Calcutta and the “untouchables” in India. She founded the “Gift of Love”, a structure for the reception and care of AIDS patients.
Years later, the missionary saint herself recalled the early days of that service: "We began with fifteen beds for as many sick people, and the first patients were four young men I managed to get out of prison because they did not want to die there. I had prepared a small chapel for them, so that these young men, who perhaps had never been close to Jesus or perhaps had drifted away from Him, could, if they wished, approach Him again".
Another example is that of Carol Baltosiewich, a nurse who was among the first to work with AIDS patients and who often clashed with people who criticized her work. Her experiences are recounted in O’Loughlin’s book, including some from her interviews.
O’Loughlin is also the author of the podcast, “Plague”, which is dedicated to the issue of AIDS cases. In the response from the Pope, the Holy Father said that he was struck by how we will be judged: “I was hungry and you gave me food, I was thirsty and you gave me drink, a stranger and you welcomed me, naked and you clothed me, ill and you cared for me, in prison and you visited me” (Mt 25: 35).
In 2008, Pope Francis himself, as the archbishop of Buenos Aires, washed the feet of 12 HIV/AIDS patients during the Holy Thursday celebration. More recently, during his visit to Panama in January 2019 for the World Youth Day celebration, the Pope visited the Casa Hogar Buen Samaritano, which takes in many HIV-positive people.
Edited from Vatican News