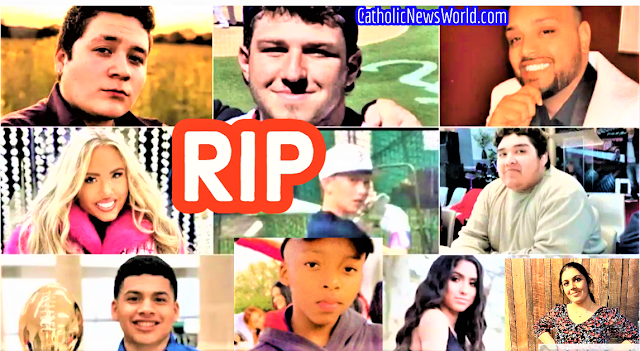 On Sunday, people prayed for the 10 people who died at the Astroworld Music Festival on November 5, 2021. A prayer vigil was held at the Annunciation Catholic Church in Texas.
The victims identified were Mirza Baig, 27, of Houston; Rodolfo Peña, 23, from Laredo; Madison Dubiski, 23, from Cypress; Franco Patiño, 21, from Illinois; Jacob Jurinke, 20, from Illinois; John Hilgert, 14, from Houston; Axel Acosta, 21, from Washington; and Brianna Rodriguez, 16, from Houston. (pictured)
Ezra Blount  a 9-year-old boy was in a medically induced coma but died on Sunday, November 14, 2021.
More than $300,000 has already been raised for the families.
On Friday, November 5th, 2021, a crowd of 50,000 people gathered at NRG Park, in Texas USA, for the Astroworld Festival, a music festival hosted by Houston rapper Travis Scott. The event turned deadly when the crowd surged the stage during Scott's performance. Hundreds were injured and 25 were sent to the hospital.
Officials say the youngest victim was 9-years-old, and the oldest 27-years-old. (the video below was aired before the deaths of the 2 others in hospital)