Saint November 19 : St. Raphael Kalinowski, O.C.D. (1835-1907) - a Carmelite who Rescued Many from Sin through the Sacrament of Reconciliation 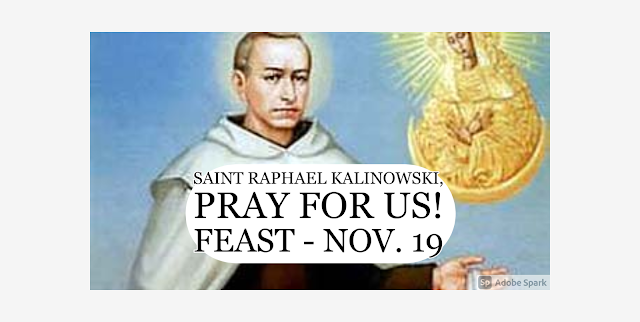 Raphael Kalinowski, O.C.D. (1835-1907)
Father Raphael of Saint Joseph Kalinowski, was born at Vilna, 1st September 1835, and at baptism received the name Joseph. Under the teaching of his father Andrew, at the Institute for Nobles at Vilna, he progressed so well that he received the maximum distinction in his studies. He then went for two years (1851-1852) to the school of Agriculture at Hory-Horky. During the years 1853-1857, he continued his studies at the Academy of Military Engineering at St Petersburg, obtaining his degree in Engineering, and the rank of Lieutenant. Immediately afterwards he was named Lecturer in Mathematics at the same Academy. In 1859, he took part in the designing of the Kursk-Kiev-Odessa railway.

In 1863 the Polish insurrection against their Russian oppressors broke out. He resigned from the Russian forces, and accepted the post of Minister of War for the region of Vilna, in the rebel army. On 24th March 1864, he was arrested and condemned to death, a penalty that was mitigated to 10 years hard labour in Siberia. With an admirable strength of spirit, patience, and love for his fellow exiles, he knew how to instill into them the spirit of prayer, serenity and hope, and to give material help together with a word of encouragement.

Repatriated in 1874, he accepted the post of tutor to the Venerable Servant of God, Augusto Czartoryski, living mostly in Paris. His influence on the young prince was such, that Augusto discovered his true vocation as priest and religious. He was received into the Salesians by their founder, Saint John Bosco, in 1887. On the other hand, Joseph Kalinowski entered the Discalced Carmelites at Graz in Austria, and received the religious name of Brother Raphael of Saint Joseph. He studied theology in Hungary, and was ordained Priest at Czerna near Krakow, 15th January 1882.

Afire with apostolic zeal, he did not spare himself in helping the faithful, and assisting his Carmelite brothers and sisters in the ascent of the mountain of perfection.

In the sacrament of Reconciliation, he lifted up many from the mire of sin. He did his utmost for the work of reunification of the Church, and bequeathed this mission to his Carmelite brothers and sisters. His superiors entrusted him with many important offices, which he carried out perfectly, right until the time of his death.

Overcome by fatigue and suffering, and held in great respect by all the people, he gave his soul to God, 15th November 1907, at Wadowice in the monastery founded by himself. He was buried in the monastery cemetery, at Czerna, near Krakow.

During his life and after death, he enjoyed a remarkable fame for sanctity, even on the part of the most noble and illustrious of people, such as the Cardinals Dunajewski, Puzyna, Kakowski and Gotti. The Ordinary Process for his eventual beatification, was set in motion in the Curia of Krakow during the years 1934-1938, and later taken to Rome where in 1943 was issued the Decree concerning his writings. His cause was introduced in 1952. From 1953-1956 the Apostolic Process was carried out, and the Congregation proceeded to the discussion on his virtues.

Pope John Paul II, on the 11th October 1980, promulgated the Decree on the heroicity of his virtues. After the approval of the miraculous healing of the Reverend Mis, the Holy Father beatified Father Raphael Kalinowski at Krakow on 22nd June 1983.

As the fame of his miracles was increasing, the Curia of Krakow in 1989, set in motion the Canonical Process to investigate the extraordinary healing of a young child. The discussions of the doctors, theologians and cardinals, were brought to a happy conclusion. On the 10th July 1990, the Holy Father John Paul II, approved the miracle for the canonization.

In the Consistory of 26th November 1990, Pope John Paul together with the Cardinals, decided to canonize Blessed Raphael Kalinowski. They set the ceremony for Sunday, 17th November 1991.
Pope John Paul II, today canonizes him, and presents him as a model to all Christians in the universal Church.