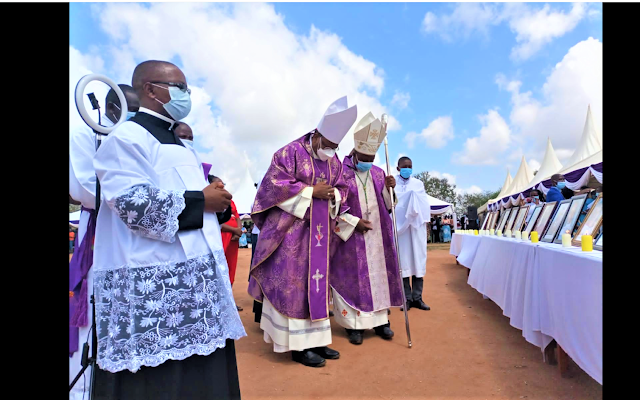 On Saturday, December 4th, 2021 a bus capsized in river Enziu, Mwingi County in Kenya, Africa. The death toll rose to 33 killed with a priest losing 11 nieces. Fr Benson Kityambu of Mwingi Catholic church lost 11 of his nieces in the accident. The Catholic community in Mwingi gathered for a funeral Mass for all the deceased. (See 2nd Video Below of the Funeral)
SEE VIDEO below of the bus:
The passengers were part of a choir traveling to a wedding. Fifteen of the dead are members of the same family who were going to attend a wedding of an elderly couple aged over 70 yrs.
The diocese said, "the choir members were full of energy and joy as they served the Lord with angelic voices in church music."

In a video seen by the Star, the bus driver attempted to steer the vehicle through a flooded section of a bridge on river Enziu. The bus belonged to the St. Joseph Seminary.

After a few seconds, the bus was overcame by raging waters and swept into the river. It was not immediately established how many people were aboard the 54 seater-bus.

The police commander Joseph Yakan confirmed the incident saying the victims were members of Mwingi Catholic Church who were going for a wedding.
Sincere condolences to all the families who lost their loved ones. Eternal Rest grant unto them O Lord, and let your perpetual light shine upon them. May they Rest in Peace. Amen.
Source: https://www.facebook.com/dioceseofKitui/photos/pcb.2383229148478162/2383228878478189/