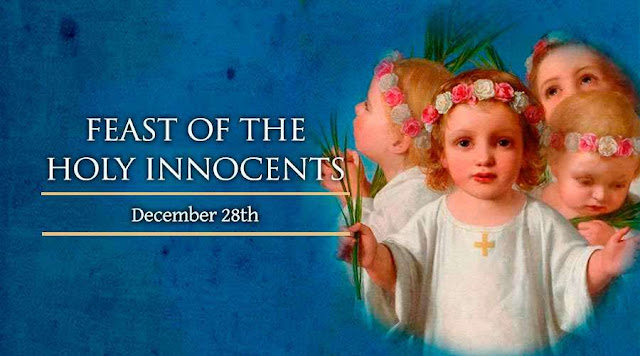 December 28, is celebrated the Feast of the Holy Innocents—those male babies put to death by a jealous Herod shortly after the birth of Christ, following his visit with the Magi.
The fourth day of Christmas commemorates these baby boys, who are considered martyrs -- the very first martyrs. (Saint Stephen, whose Feast we celebrated 2 days ago, was the first martyr of the Church Age). As Herod ordered the death of children two years or less, in or around the small town of Bethlehem, the number of these Holy Innocents was probably no more than 25. Nonetheless, these innocent babies are glorious martyrs who died not only for Christ, but in His place.
1  Matthew 2: 1-18:
After Jesus was born in Bethlehem in Judea, during the time of King Herod, Magi from the east came to Jerusalem 2 and asked, “Where is the one who has been born king of the Jews? We saw his star when it rose and have come to worship him.” 3 When King Herod heard this he was disturbed, and all Jerusalem with him. 4 When he had called together all the people’s chief priests and teachers of the law, he asked them where the Messiah was to be born. 5 “In Bethlehem in Judea,” they replied, “for this is what the prophet has written: 6 “‘But you, Bethlehem, in the land of Judah, are by no means least among the rulers of Judah; for out of you will come a ruler who will shepherd my people Israel.’” 7 Then Herod called the Magi secretly and found out from them the exact time the star had appeared. 8 He sent them to Bethlehem and said, “Go and search carefully for the child. As soon as you find him, report to me, so that I too may go and worship him.” 9 After they had heard the king, they went on their way, and the star they had seen when it rose went ahead of them until it stopped over the place where the child was. 10 When they saw the star, they were overjoyed. 11 On coming to the house, they saw the child with his mother Mary, and they bowed down and worshiped him. Then they opened their treasures and presented him with gifts of gold, frankincense and myrrh. 12 And having been warned in a dream not to go back to Herod, they returned to their country by another route. 13 When they had gone, an angel of the Lord appeared to Joseph in a dream. “Get up,” he said, “take the child and his mother and escape to Egypt. Stay there until I tell you, for Herod is going to search for the child to kill him.” 14 So he got up, took the child and his mother during the night and left for Egypt, 15 where he stayed until the death of Herod. And so was fulfilled what the Lord had said through the prophet: “Out of Egypt I called my son.”
16 When Herod realized that he had been outwitted by the Magi, he was furious, and he gave orders to kill all the boys in Bethlehem and its vicinity who were two years old and under, in accordance with the time he had learned from the Magi. 17 Then what was said through the prophet Jeremiah was fulfilled:
18 “A voice is heard in Ramah, weeping and great mourning, Rachel weeping for her children and refusing to be comforted, because they are no more.”
Saint Augustine of Hippo wrote of the Holy Innocents:
“Today, dearest brethren, we celebrate the birthday of those children who were slaughtered, as the Gospel tells us, by that exceedingly cruel king, Herod. Let the earth, therefore, rejoice and the Church exult — she, the fruitful mother of so many heavenly champions and of such glorious virtues. Never, in fact, would that impious tyrant have been able to benefit these children by the sweetest kindness as much as he has done by his hatred. For as today's feast reveals, in the measure with which malice in all its fury was poured out upon the holy children, did heaven's blessing stream down upon them.
"Blessed are you, Bethlehem in the land of Judah! You suffered the inhumanity of King Herod in the murder of your babes and thereby have become worthy to offer to the Lord a pure host of infants. In full right do we celebrate the heavenly birthday of these children whom the world caused to be born unto an eternally blessed life rather than that from their mothers' womb, for they attained the grace of everlasting life before the enjoyment of the present.
The precious death of any martyr deserves high praise because of his heroic confession; the death of these children is precious in the sight of God because of the beatitude they gained so quickly. For already at the beginning of their lives they pass on. The end of the present life is for them the beginning of glory. These then, whom Herod's cruelty tore as sucklings from their mothers' bosom, are justly hailed as "infant martyr flowers"; they were the Church's first blossoms, matured by the frost of persecution during the cold winter of unbelief.”
As we contemplate the martyrdom of the holy innocents, our Christmas joy is tempered by sadness. We are reminded of the sacrifice and suffering that love sometimes requires, and look to this army of “infant martyr flowers” who now sit in the glory and presence of the Lord!
PRAYER: Father,
the Holy Innocents offered you praise by the death they suffered for Christ. May our lives bear witness to the faith we profess with our lips. We ask this through our Lord Jesus Christ, your Son, who lives and reigns with you and the Holy Spirit, one God, for ever and ever. Amen
IMAGE SOURCE: FACEBOOK/Text 365Rosaries Blog