Saint December 5 : Blessed Niels Stensen, a Convert who was a Famous Scientist and Became a Bishop Devoted to the Eucharist 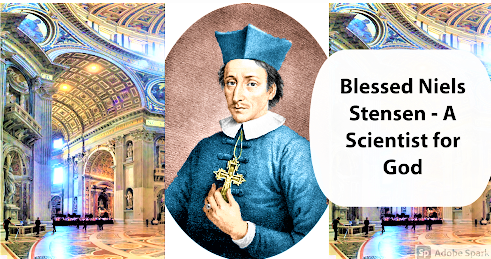 God’s scientist: Blessed Niels Stensen 1638-86
Niels Stensen from a Lutheran family in Denmark brought the same relentless logic of his profession as a scientist to his pursuit of truth in the area of religion. He became singularly devoted to the Eucharist and the Scriptures. This inspired him as a bishop in Germany and northern Europe.

Niels Stensen from a Lutheran family in Denmark brought the same relentless logic of his profession as a scientist to his pursuit of truth in the area of religion. He became singularly devoted to the Eucharist and the Scriptures. This inspired him as a bishop in Germany and northern Europe.

‘Either that host is nothing but a piece of bread, and those who are showing it such honour are bewitched, or else it really is the body of Jesus Christ, and in that case why do I not venerate it as well?’
This thought – this ‘either-or’ question – had grabbed hold of the mind of Niels Stensen, a seventeenth-century Danish scientist, while he was attending a Corpus Christi procession in the city of Livorno in Italy. The year was 1666.
The reasoning was typical of the man, and the question would not let him go until he became a Catholic the following year. In time, he became a priest and an outstanding bishop, and his exemplary life eventually led to his beatification by Pope John Paul II in 1988.
Lutheran heritage
The story of Niels Stensen begins in January 1638, in Copenhagen, where a son was born to Sten Pedersen and Anne Nielsdatter. The parents were Lutherans, and entering the ministry was something which ran in the family: two of Niels’s uncles were pastors in that Church. From an early age it was obvious that the young Niels was very intelligent, and he began to specialise in the area of medicine, and particularly in the new science of anatomy.
There is a fallacy prevalent today – held by many – which puts science and religion at opposite poles, as if they are always at loggerheads. For some, to be a believer suggests leaving reason outside the door, while faith is often seen as ‘blind’ and ‘unthinking’. Niels Stensen pursued both, and saw no contradiction.
Science and Christianity
Stensen always acknowledged that, as a scientist, he was subject to a law which was good and in every respect divine. ‘One sins against the majesty of God,’ he wrote, ‘if one refuses to look at nature’s own work, and if one is content with merely reading what someone else has written about it.’  It was as an anatomist that Niels became most famous. His most beautiful writings came when he discovered new organs and glands in the bodies of both animals and human beings.

He was never inclined to see anything contradictory between a scientific and a Christian attitude towards the reality we experience with our senses. ‘Give me grace, O God,’ he wrote on one occasion, ‘to keep myself free from all sin, and especially from a rash and insufficiently thought-out judgement or opinion on things.’
Advances in Anatomy
As a young man, Neils spent several years both in Amsterdam University and the ancient university town of Leiden, also in Holland, from where he received a doctorate in medicine in the year 1663. At the end of his Dutch period, he travelled on to Paris.
By this time Niels was acquiring a European reputation as an anatomist. One journal wrote: ‘The Danish scholar is in Paris at present, and daily carries out dissections in the presence of many who are eager for knowledge’.
It was in Paris that his work on the human brain gained most fame. Specialists agree that it provided the basis for research over the following two hundred years. His starting point was typical and commonplace: ‘We shall seek the truth by raising objections against it, and we shall not allow ourselves to rest until we reach it, confirmed by manifest proof’.
Thirst for truth
Niels brought this same relentless logic to his pursuit of truth in the area of religion. As we have seen, it was his attendance at the Corpus Christi procession in 1666 which had moved him to consider Catholicism.
In a letter to a friend, he wrote that he ’employed every conceivable opportunity to seek the truth, convinced that God would enlighten my mind with his light, so that I could come to a position where I could acknowledge the truth that I sought with a sincere heart’.
He then goes on: ‘I was not satisfied by discussing these questions with learned men, of whom no one can deny that many are to found among Catholics, but I wanted to obtain information on the original text of Holy Scripture and on ancient authors.
‘Thus on many occasions I repaired to a well known library and there in tranquillity and peace I consulted many ancient Greek and Hebrew manuscripts, so as not to rely only on the Latin text without examining things further and comparing it with the original texts in the other two languages. ‘
Deep conviction
This examination was carried out with the same precision and critical spirit as any of Stensen’s scientific research. After he had read and verified, examined and compared, he wrote, ‘I could not escape feeling deeply convinced of the truth of what the Catholics really acknowledge’.
Even after becoming a Catholic, Niels continued his work as a scientist, but within a few years he felt drawn to offer himself for the priesthood. At the age of thirty-seven, in the year 1675, he was ordained. It was Holy Saturday, and he celebrated his first Mass in the Church of the Most Holy Annunciation, in Florence, on Easter Sunday.
It was not an easy time to be a Catholic in the Nordic or North European countries. Most of these had converted to Lutheranism since the Reformation, and Pope Innocent XI decided to send Niels as bishop, first of all to Hanover, and then to Munster, where he was appointed Vicar Apostolic for the North.
His conditions of life were far from pleasant, but during his whole life as a priest, and later as a bishop, he gave away virtually everything he had, and lived very frugally, in marked contrast with some of the prince bishops of that era. One duke tried to present him with a coach and six horses, in keeping with his status. ‘Like St. Nicholas, I would rather have two small donkeys,’ was his reply.
Niels laboured almost a decade in the Northern mission territories, and as a vibrant preacher was instrumental in bringing many back to the faith. After only ten years in the apostolate he died, in the year 1686, at the age of forty-eight. His body was returned to Florence, where he was buried in the Basilica of St. Lawrence.
A model for us all
The Eucharist had been instrumental in his conversion. It was also an instrument in his sanctification of others and in his zeal for souls. ‘There is only one human response to the self-giving love which shows itself on the cross and lives in the Church as the true bread of humanity,’ he wrote. ‘The more we discover and say “yes” to this love, the less do we remain as merely ourselves. The love of Christ urges us on.’
Pope John Paul II beatified Niels on 23 October 1988 with these words: ‘Blessed son of the Danish land! You enliven the choir of those great people who have preceded you on the way to holiness. With them you cry: He who is mighty has done great things for me’.
In (2005) the Year of the Eucharist, Niels Stensen – the man who answered the ‘either-or’ question – is a model for us all.
This article first appeared in The Messenger (May 2005), a publication of the Irish Jesuits.