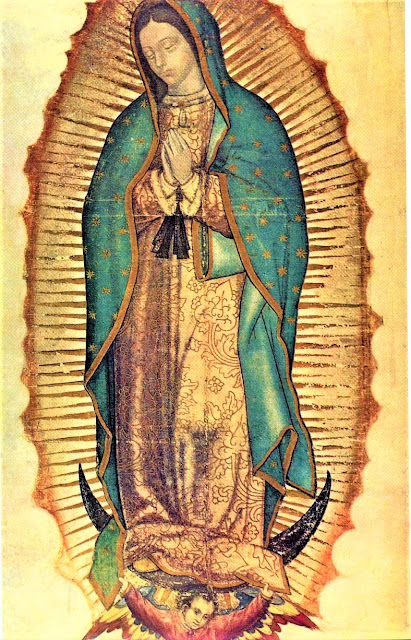 The Image of Our Lady of Guadalupe on the tilma of the Mexican Saint Juan Diego has a supernatural origin. The image appeared on the tilma in 1531. Biblically, it portrays scenes from the book of Revelation. Specifically, the Image portrays Revelation 12:1-2, which says, “A great sign appeared in the sky, a woman clothed with the sun, with the moon under her feet, and on her head a crown of twelve stars. She was with child and wailed aloud in pain as she labored to give birth.” Also, over the years scientists have studied the tilma and this is what they discovered:

1. Scientists have discovered that Mary’s eyes possess the three effects of image refraction in a living eye. For over 20 years, this graduate in environmental systems engineering at Cornell University has studied the image of the Virgin left on the rough maguey-fiber fabric of Juan Diego's tilma. Though the dimensions are microscopic, the iris and the pupils of the image's eyes have imprinted on them a highly detailed picture of at least 13 people, including Bishop Zumarraga and St. Juan Diego. . The same people are present in both the left and right eyes, in different proportions, as would happen when human eyes reflect the objects before them.Tonsmann said he believes the reflection transmitted by the eyes of the Virgin of Guadalupe is the scene on Dec. 9, 1531, during which Juan Diego showed his tilma, with the image, to Bishop Juan de Zumárraga and others present in the room. In his research, Tonsmann used a digital process used by satellites and space probes in transmitting visual information.

2. The image shows no sign of deterioration after nearly 500 years!  The tilma or cloak of Juan Diego on which the image of Our Lady has been imprinted, is a coarse fabric made from the threads of the maguey cactus. This fiber disintegrates within 20-60 years. There is no under sketch, no sizing and no protective over-varnish on the image.
3. Microscopic examination revealed that there were no brush strokes.
The image seems to increase in size and change colors due to an unknown property of the surface and substance of which it is made.
According to Kodak of Mexico, the image is smooth and feels like a modern day photograph.  (Produced 300 years before the invention of photography.)
The tilma (an indigenous cape worn at the time of the apparition) is made of agave popotule fiber from the ixtle plant.

4. On the morning of Nov. 14, 1921, a bomb was detonated in the Basilica of Guadalupe. Luciano Perez Carpio, an employee of the Private Secretariat of the Presidency, protected by soldiers disguised as civilians, placed the bomb at the foot of the Image of the Virgin of Guadalupe. The explosion was heard a kilometer away, but absolutely nothing happened to the Image of the Virgin of Guadalupe. Bronze candelabras and a crucifix on the altar, though, were bent by the impact.

5. Studies have not succeeded in discovering the origin of the coloration of the Image. In 1979, Americans Philip Callahan and Jody B. Smith studied the image with infrared rays and discovered to their surprise that there was no trace of paint and that the fabric had not been treated with any kind of technique.

6. The stars on Our Lady's Mantle coincide with the constellation in the sky on December 12, 1531. All who have scientifically examined the image of Our Lady over the centuries confess that its properties are absolutely unique and so inexplicable in human terms that the image can only be supernatural!

7. In 1795, nitric acid was accidentally spilled on the left side of the Image. The acid did no significant damage, either to the Image or the fabric itself. There is a small distortion on the image where the acid spilled.