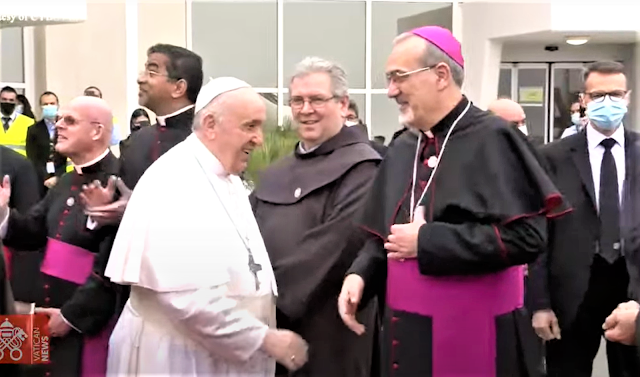 Pope Francis left Cyprus with thanksgiving for the hospitality received and prayers for peace for the nation, as Cypriots express their appreciation for the Pope's message of hope, peace, and unity.

As per custom, he sent a telegram to the President of the Republic of Cyprus, Nicos Anastasiades, as he left the country.

In the message, the Pope said,

AS I CONCLUDE MY APOSTOLIC VISIT TO CYPRUS, I RENEW MY DEEP GRATITUDE TO YOUR EXCELLENCY AND TO THE PEOPLE OF CYPRUS FOR YOUR WARM WELCOME AND HOSPITALITY. WITH THE ASSURANCE OF MY PRAYERS FOR THE PEACE AND PROSPERITY OF THE NATION, I INVOKE UPON ALL OF YOU THE BLESSINGS OF ALMIGHTY GOD.

Before leaving the Apostolic Nunciature of Nicosia where he stayed in Cyprus, the Pope gave gifts of a statue of St. Joseph, a mosaic of the papal coat of arms, and a commemorative medal of the Pope’s visit to Cyprus.

After two days in Cyprus, Pope Francis departed Cyprus’ Larnaca airport at 8:30 am on Saturday morning for the Athens International Airport where he arrived at 11:10 local time.

The Holy Father’s official welcome at the airport is followed by a welcome ceremony at the Presidential Palace in Athens. He then pays a courtesy visit to the President of Greece, Katerina, Sakellaroupoulou, meets with the Prime Minister and then with local authorities, civil society and the diplomatic corps.

The Pope’s afternoon schedule includes a meeting with the country’s bishops, priests, religious, consecrated person, seminarians and catechists at the Cathedral of St. Dionysius in Athens. He then has a private meeting with the members of the Society of Jesus at the Apostolic Nunciature of Athens.

On Sunday, one highlight of the Pope’s schedule will be his visit with migrants and refugees at the “Reception and Identification Center” in Mytilene town on the Greek island of Lesbos. For the second time in five years, the Pope will visit this island that has been dealing with migrant arrivals.

The Pope is scheduled to return to the Vatican on Monday.