Wow Mariah Carey Says She is Not the Queen of Christmas but the Blessed Virgin Mary is Queen! 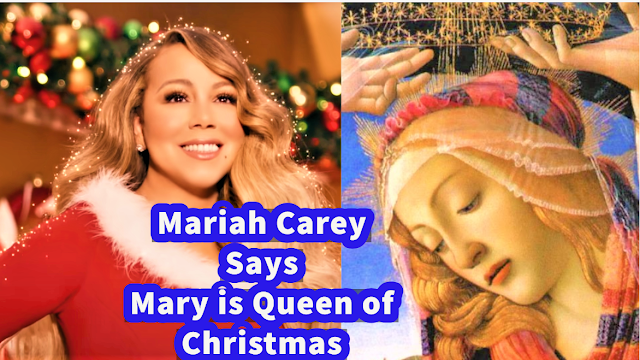 Mariah Carey, a popular singer from the USA, became known as the Queen Of Christmas after releasing the famous 1994 song, "All I Want for Christmas Is You". During a recent interview with BBC she revealed the truth. Mariah Carey said that she didn't choose this title herself and believes the title should be given to the Virgin Mary. She continued to say, “…I just want to humbly say that I don’t consider myself that. I’m someone that loves Christmas, that happened to be blessed to write All I Want For Christmas Is You. And a lot of other Christmas songs. And let’s face it, you know everybody’s faith is what it is. But to me, Mary is the Queen of Christmas.” “And I just want to say thank you to all the listeners who have been supportive of me for all this time with this song and other songs that I've done. I just want to say thank you and give love to everybody on Christmas Day.” - Mariah Carey

Anonymous said…
I love Mariah and her comment regarding the Virgin Mary makes me love her and respect her even more as the talented singer that she is. Also, her Merry Christmas�� �� album is considered to be one of the best Christmas Albums of all time. To me, All I want For Christmas is not the best song on that album, but her interpretation of Holy Night, which turned out to be gold certified. There are so many beautiful songs on her Merry Christmas album that are impecable executed vocally speaking such as: Silent Night, Hark the Herald Angels Sing!, Jesus Oh What a Wonderful Child, Christmas (Please come home), and Jesus Born on This Day ⭐️. I only wish that all these other songs will also be known, appreciated and enjoyed, as the whole album brings real joy to the listener and helps to get into the Christmas spirit ��
December 30, 2021 at 7:05 PM