Bishops of Burkina Faso Issue Statement after Military Takeover of Country and Arrest of President "...we can only insistently invite prayer to ask God to enlighten us..." FULL TEXT 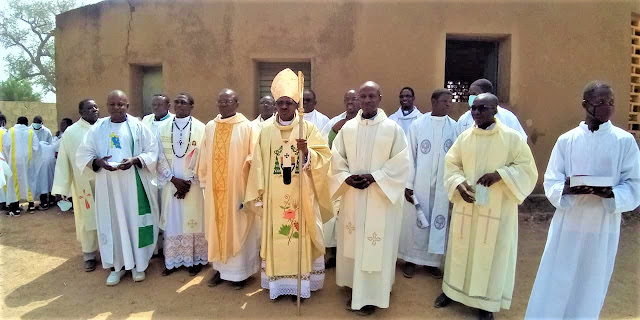 In the capital of Burkina Faso, Africa, soldiers arrested the President Roch Marc Christian Kaboré and other high officials of the State. On Sunday, January 23, the military in some barracks mutinied. President Kaboré, in power since 2015 and re-elected five years later with the promise of making the anti-jihadist struggle his priority, had been increasingly challenged by a population exasperated by jihadist violence and its inability to face it.
In the last few days a military junta has taken power in the African country. Burkina Faso is one of the countries participating in the G5 Sahel initiative, supported by France and the European Union, among others, to create a security framework in the five Sahel countries that have joined this initiative (Mauritania, Mali, Burkina Faso, Niger and Chad). A great number of civilian people support the military takeover.
The military junta, led by Lieutenant Colonel Paul-Henri Sandaogo Damiba, the commander of the third military region in the east of the country, calls itself the "Mouvement Patriotique pour la Sauvegarde et la Restauration" (MPSR). A graduate of the Paris Military School, he holds a master's degree in forensic science from the Conservatoire National des Arts et Métiers (CNAM) in Paris and a certificate as Defense Expert in Management, Leadership and Strategy.
The United Nations, the Economic and Development Community of West Africa (ECOWAS/ECOWS) and France have condemned the coup and called for the immediate release of President Kaboré and other figures held by the military. " (Above Information edited from combined Fides reports)
DECLARATION OF THE BISHOPS OF BURKINA FASO ON THE NEW NATIONAL SITUATION
To the Sons and Daughters of the Church Family of God in Burkina Faso, To all Men and Women of good will,
Following the meeting, at the initiative of the current authorities of Burkina Faso, with various religious leaders, on Wednesday, January 26, 2022, to give them the reasons that motivated their action on January 24, we, Bishops of Burkina Faso, take note changes that have taken place. Such abrupt and unconstitutional changes are not without their problems. If the security challenge is the first that motivated these events, others also need to be addressed, including the return of displaced people to their homes, national reconciliation, economic challenges and many others that require everyone's participation.
In this context, we would like to recall that authority is a service for the common good. The new authorities will take it to heart to organize themselves properly to meet the deep aspirations of our people. We invite them to guarantee those arrested their safety, physical integrity and dignity.
Faced with the novelty of the national situation and the legitimate questions of each other, we can only insistently invite prayer to ask God to enlighten us and give us his Spirit of wisdom so that we can progress towards a definitive way out of the crisis and a lasting peace.
May the Blessed Virgin Mary, Queen of Peace and Saint Joseph, Protector of the Universal Church, accompany with their powerful intercession our country in search of reconciliation, justice and true peace. .
Done in Ouagadougou, January 27, 2022
For the Bishops of Burkina Faso
The President of the Burkina-Niger Episcopal Conference
Source: http://www.egliseduburkina.org/declaration-des-eveques-du-burkina-faso-sur-la-nouvelle-situationnationale/